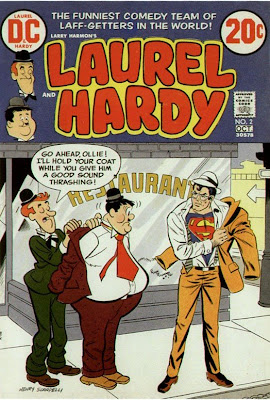 Actually there's no way of knowing if this cover gag had anything to do with the story inside. Why? Because this issue, DC's LAUREL AND HARDY # 2 from around 1972, was never published! I'm not certain why at the moment. Not even sure if issue 1 ever came out. I know an advertised companion digest comic did NOT; a rights dispute most likely. Seems odd that DC would have sought out the rights at all having just recently cancelled the long-running Bob Hope and Jerry Lewis tie-ins. The art, as you can tell by the signature, was by humor artist, inker and future ARCHIE staple, Henry Scarpelli (whose son Glenn would appear in later episodes of the CBS seventies sitcom, ONE DAY AT A TIME).
Posted by Booksteve at 1:30 PM