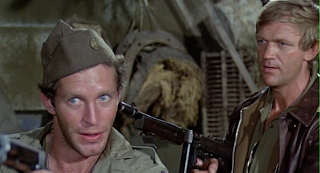 INGLORIOUS BASTARDS is the title of the long-awaited but finally in sight new Quentin Tarentino film. It is, according to a script leaked to the Internet, supposedly about a group of Jewish commandos in World War II who go up against a ruthless SS officer. Clips recently shown on ENTERTAINMENT TONIGHT show Hitler and a female

character with a strong role.

Supposedly, Tarentino was making this picture because he was so enamored of the 1978 neo-grindhouse picture with the same name. That said, this thing seems to have no resemblance at all to the original except for the title...and quite frankly, it's not THAT good of a title!
The 1978 INGLORIOUS BASTARDS quickly became one of my all-time favorite war movies. What it is NOT is realistic in any way. What it IS is a rip-roaring, old-fashioned good guys vs. bad guys epic with a motley crew of escaped army prisoners taking over a secret mission after they accidentally shoot the specially trained commando troops who were disguised as Nazis!
An unapologetic B movie from the word go, INGLORIOUS BASTARDS stars Bo Svenson who had turned out to be a surprisingly charismatic leading man (in the WALKING

TALL sequels) after years as a great TV character actor. Fred Williamson checks his legendary ego at the door and is great as the number two guy. Additional roles are filled by, among others, Peter Hooten (who was just about to become memorable as TV's DR. STRANGE) and the son of VOYAGE TO THE BOTTOM OF THE SEA's Richard Basehart. Everyone involved giv

es an A list performance (even though the Italian production is dubbed and some of the actors do NOT dub their own voices!).
On their way to be court-martialed for various reasons, our unlikely heroes escape when their caravan is attacked. They decide to head for neutral Switzerland. Along the way, we have to deal with the various eccentricities of each character as they learn how to get along for their common good. Then, through a most convoluted but workable scenaro, they end up inheriting an Allied mission to capture or destroy a secret weapon being carried by train.

Beautiful photography, a rousing score, a seemingly endless supply of bullets, Nazis with bad aim, naked girls with machine guns, a surprisingly good cast and alot of old-fashioned derring-do make it a winner all the way to the somewhat sudden ending.
It's surprising Hooten didn't become a bigger star as he steals many scenes here. There's a good chemistry between Williamson and Svenson, also.
INGLORIOUS BASTARDS is clearly inspir

ed by THE DIRTY DOZEN. It is also reminiscent of WWII fantasies like Clint Eastwood's KELLY'S HEROES or Errol Flynn's DESPERATE JOURNEY where a sense of fun and excitement carry the viewer along in ways that never happened in the real world, ING

LORIOUS BASTARDS is a violent but most enjoyable romp of a swashbuckling soldier film. Although little-known (I had never even heard of it until recently myself!), it comes close to being a perfect B movie and certainly didn't need to be remade. Luckily, it doesn't seem as though Tarentino's version is really a remake after all.
UPDATE: I read where Quentin is intentionally misspelling the title as "Inglourious Basterds" and that the Brad Pitt starrer will compete at Cannes. Pitt's character is described in PEOPLE as "...leader of the 'Basterds,' a group of Jewish-American soldiers who scalp and brutally kill Nazis." He is said to be "...not your Warner Brothers 1950's WW2 hero … this is a hillbilly straight from the mountains of Tennessee."
Posted by Booksteve at 12:53 PM