Whatever Happened to Joe Shuster? 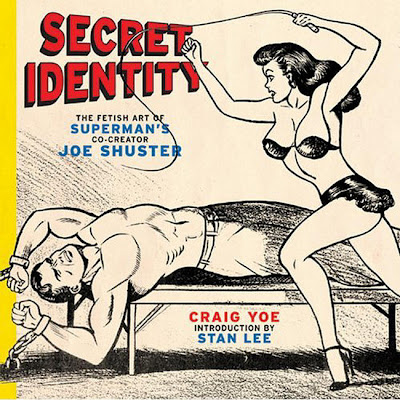 Every comics fan knows the legend of Siegel and Shuster and how they created the one and only SUPERMAN and then were shafted by the big corporation they sold it to for about forty years! When, in the mid forties, they took legal action to regain some control over their creation, they vanished from National DC and their names vanished from the strips. After unsuccessful attempts at other creations like FUNNYMAN, Jerry Siegel humbled himself and returned to writing for DC but this time anonymously. He even wrote many memorable LEGION OF SUPERHEROES yarns in the pre-Shooter days before once again filing legal papers and once again disappearing from mainstream comics.
Have you ever wondered, though, during all this time, what was artist Joe Shuster doing? Oh, many of us have read of his failing eyesight and how he was forced to work as a delivery boy in Manhattan. One perhaps apocryphal story has Joe actually delivering to the DC offices in the sixties!
One of pop culture's most eclectic writers and researchers, Craig Yoe (MODERN ARF), is about to answer that question. And the answer is a doozy! He sent out this press release to a number of us bloggers this past week. As Yoe tells it : I recently discovered incredible, previously unknown, fetish art by the creator of Superman, Joe Shuster. The artist and his writing partner, Jerry Siegel, had sold Superman for 130 dollars. When they sued to get the rights back they lost and got drummed out of the comic book industry and Shuster fell on hard times. It was unknown that to get by and/or because of a personal interest in the subject, Shuster then did S&M porn for under-the-counter booklets called "Nights of Horror," sold in Times Square in the early fifties. The back story I uncovered involves the Mob, showgirls, neo-Nazi Jewish juvenile delinquents, inspired by Shuster's art, known as the Brooklyn Thrill Killers, the famed anti-comic book crusader Dr. Frederic Wertham, Senate investigations, cops on payola, the books being banned by the Supreme Court, teenage girls being horse-whipped in the park, two murders...and dare I say MORE?
From my own investigations into the Christa Helm story, I know how these things can snowball in the most unexpected directions. Looks like one of the more bizarre stories to turn up in comics history in some time. The weird thing is, Shuster's art seems to have gotten MUCH better during this period! Note that, like many illustrators, he continued to utilize stock faces, thus making many of the characters in the book look not only amazingly familiar but also making the reader feel veeeery awkward to see doppelgangers of Clark, Lois, etc. in these situations! The book is SECRET IDENTITY: THE FETISH ART OF SUPERMAN'S CO-CREATOR JOE SHUSTER and is out on the first of April. Until then you can find out more over at Craig's new blog http://secret-identity.net/.
Posted by Booksteve at 6:16 PM