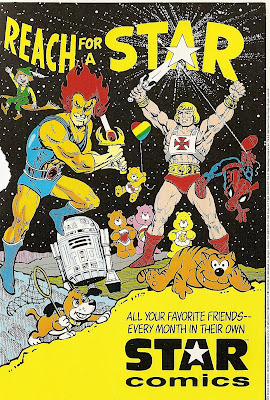 This 1986 ad is for Marvel's short-lived attempt at an all-kids line of comics. Initially, their strategy seemed to be to hire all of the folks who used to work for Harvey Comics and then have them do Harvey Comics-like series. Eventually, they ended up with more licensed product such as those seen here--THUNDERCATS, MASTERS OF THE UNIVERSE, HEATHCLIFF and CARE BEARS. Note also the SPECTACULAR SPIDER-HAM! None of it mattered. Although fondly remembered in some circles and still being discovered by some young collectors such as son bookdave, STAR COMICS was and is a trivia question in comics history.
Posted by Booksteve at 10:06 AM