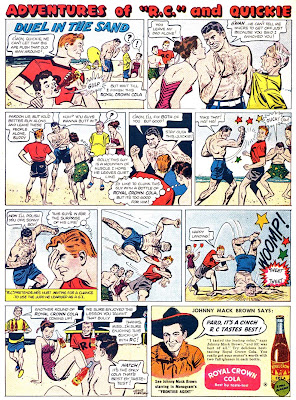 Here's one of those wonderful comic strip ads from the 1940's that were often better drawn than the books in which they appeared. In this case, we're even able to identify the artist as Creig Flessel, a DC stalwart who had done some early SANDMAN amongst many other strips for them. THE ADVENTURES OF RC AND QUICKIE appeared for several years and, like this one, usually ended with an endorsement from a B movie cowboy (in this case Johnny Mack Brown.). Royal Crown Cola was, as I understand it, particularly popular in the Southern US states. My mother grew up drinking it in North Carolina and I recall there were racks outside of stores for empty RC bottles when I was a kid and we'd visit. She grew to like Coke as well or better (and toward the end of her life inexplicably switched to Pepsi...with salt added! Still, for most of my formative years, we had RC bottles in the fridge. Haven't had one since the late sixties myself. Never liked 'em, no matter how much I like their ads.
Posted by Booksteve at 10:17 PM