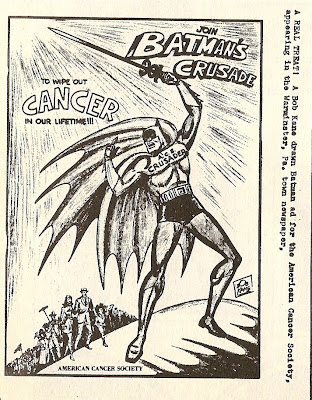 As most of my readers know, BATMAN "creator" Bob Kane actually rarely drew BATMAN. In fact, I wouldn't be surprised if some of the art still credited to Kane was simply drawn by someone as yet not uncovered! Here, though, is Kane's Caped Crusader in all his scratchy stiffness. This newspaper ad for The American Cancer Society was reprinted in 1989's special BATMAN issue of the magazine MODEL AND TOY COLLECTOR. No dates or additional information is given and since Kane's crude art style never seems to have varied its hard to date it but my guess would be fifties or early sixties. Note also that there is NO DC trademark notice nor official logo. Batman himself, by virtue of the "ACS Crusader" logo, is drawn off-model! I would make the leap that this means Kane just took it on himself to contribute this using "his" character. Anyone have any more information?
Posted by Booksteve at 12:20 PM