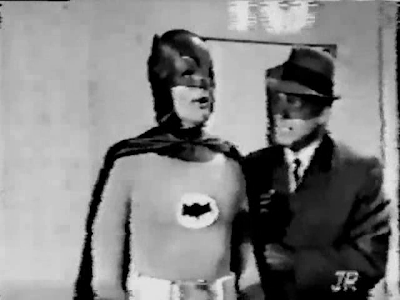 In the Fall of 1966, ABC invested a lot of time and money toward Milton Berle's fourth or fifth attempt at a TV comeback. THE MILTON BERLE SHOW was Mr. Television's return to the variety show format that had made him a household word on NBC in the early 1950's. The show was produced by Bill (Jose Jimenez) Dana, written by at least one of Jack Benny's classic writers and some talented new guys. Berle hosted the then-annual look at the new 1966-67 television season for the network and to top it off, they even 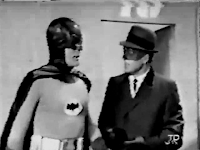 gave him the biggest possible guest he could have for one early episode--Batman! Then they even threw in Van Williams as the Green Hornet AND Bruce Lee as Kato at the start of THAT well-remembered series!
And STILL the ensuing sketch is little-remembered to this day! It was on YouTube for awhile but is sadly gone now but here are a few screen shots and a still I found for sale on another site.
The premise is that w 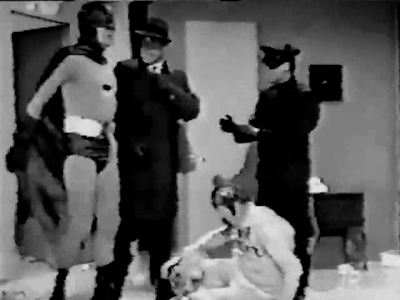 ith the rush to sign actors as villains on the two popular Fox shows, what if an actor was signed to play two different villains on both shows as they shot simultaneously on the lot! Thus we see Berle as the Liar (or rather more accurately, the "Riar."), an Oriental villain fighting Adam West's Caped Crusader only to be called constantly to the next soundstage where his Fink Pussycat goes up against the Hornet and Kato. We even get to see Bruce Lee in action if only for just a second. 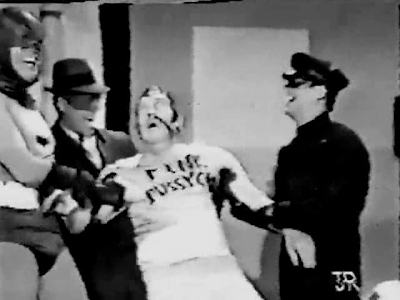 It's kind of funny looking at it as a comics fan...and a fan of the two TV series...and ignoring its politically incorrectness 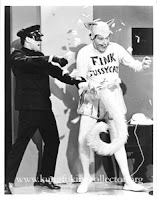 ...but even then it goes on too long. Still, since most BATMAN and GREEN HORNET fans were probably watching THE MAN FROM U.N.C.L.E. on NBC, most fans still don't even know that this weird guest-appearance occurred.
Milton Berle went on to play villain Louie the Lilac on BATMAN but did NOT appear on THE GREEN HORNET. I believe an edited version of this sketch (in all its horrid visual quality) is on one of the various Bruce Lee DVD's that explot every moment of footage ever found of the late martial artist.
Posted by Booksteve at 9:26 AM