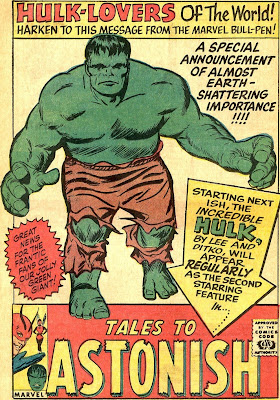 When Marvel was young, THE INCREDIBLE HULK, their second attempt at a super-hero monster mag was heralded with little messages along the bottom pages of their other mags of the time. Although now considered classic, that original series lasted all of six issues before being cancelled. A few years later, after the character had bounced around in FANTASTIC FOUR, SPIDER-MAN and THE AVENGERS, someoned nade the decision to give the feature a second try, this time in TALES TO ASTONISH. The only problem was that this was the home of 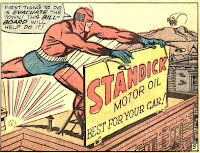 Giant Man and the Wasp. Perhaps to soften the blow, Ol' Greenskin fought Highpockets in issue 59 as written by Stan Lee and drawn by Dick Ayers (note the in-joke sign from that issue). In the back of the issue, though, was this full page Kirby/Ayers ad (with a somewhat disproportionate and surprisingly placid-looking Hulk) announcing the coming of the feature that would eventually take over the book.
Posted by Booksteve at 12:36 PM