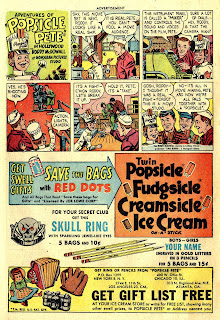 I'm on record as being a big fan of actor Roddy McDowall. I have to say, however, that I appreciate his grown-up appearances (although he played young men until he was nearly 50) more than I do his child star films. Here, from somewhere inbetween, he teams up with now long-retired advertising icon Popsicle Pete in yet another comic strip ad!
Posted by Booksteve at 4:51 PM