Wally Wood and the Cartoonist 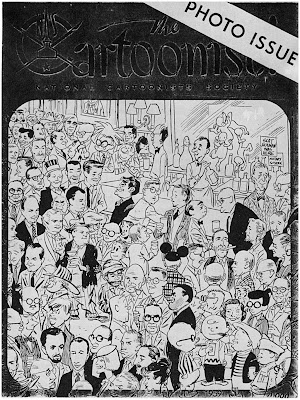 Over at HOORAY FOR WALLY WOOD today we've posted the picture seen here (courtesy of Thom Buchanan) which is a jam-packed Wood drawing of a National Cartoonist Society meeting in 1959 from the cover of their in-house mag, THE CARTOONIST. The problem is...who ARE all of these folks? Dozens of no doubt on the mark caricatures of (mostly newspaper) cartoonists include the instantly recognizable Al Capp as well as an amusing look at Walt Kelly, Charles Schulz and Ernie Bushmiller as versions of their own characters.. That's Milton Caniff next to SMOKEY STOVER's Bill Holman in the fireman hat (note the trademark "foo" on his collar). I THINK the guy with glasses at the bar is Mort Walker. Presumably Floyd Gotfredson with the mouska-ears. Hank Ketcham looked nothing like Dennis the Menaces's dad but the blackhaired guy on the right does and is probably supposed to be him. That's Rube Goldberg top right with the award named after him, the Rueben, taking a drink...next to a shmoo. The grungy looking bearded guy is PROBABLY Bill Mauldin. One of the two women is probably supposed to be Dale Messick. Looks like a self-portrait toward the back on the left--guy with cigarette hanging off his lips. Anybody name any more? Answer here or there in the comments or send emails. We want to know who these people are supposed to be!
Posted by Booksteve at 9:15 AM