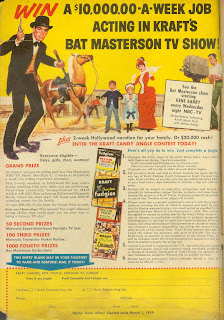 Gene Barry was omnipresent on TV in the late fifties/early sixties starring in BAT MASTERSON at the height of the western craze, then switching to BURKE'S LAW at the early peak of the gimmicky detective craze (Amos Burke was a millionaire cop). Here we have a tie-in to sponsor Kraft in which a winning jingle could get YOU a top-paying role on BAT MASTERSON! It should go without saying that unless you have a time machine, this contest is no longer valid.
Posted by Booksteve at 9:10 AM