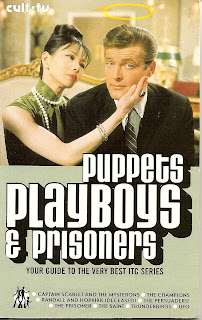 Unexpectedly happened on a used book sale at the Public Library today and, as befitting my name, I could not resist. Sometimes, these sales can be filled with treats and delights. Other times, there are bargains you just can't pass up. I did, however put back a 25 cent hardcover copy of Maxene Andrews' autobiography as the whole middle section was detached. Likewise, I did not take the Rolling Stone SNL book from the early '80's. Never thought it was worth full price and sadly, it didn't look like it was worth 50 cents to me today, either.
I did pick up, however, about a dozen other titles (for less than five bucks total!) including a volume on ALFRED HITCHCOCK PRESENTS, Arthur Marx's controversial Bob Hope biography and the book seen here.
PUPPETS, PLAYBOYS AND PRISONERS is the type of thing you wonder how it ever came to the Library in the first place. It's also my favorite type of thing to find there. With no price, it seems to have possibly been part of a box set of similar paperbacks on Cult TV shows. Clearly British, this slim1998 volume gives brief overviews and detailed episode guides to ITC series including THE SAINT and THE PERSUADERS (both with Roger Moore), THE CHAMPIONS, RANDALL AND HOPKIRK (DECEASED) and the Gerry Anderson productions, THUNDERBIRDS, UFO and CAPTAIN SCARLET AND THE MYSTERONS. As a confirmed anglophile and British TV buff, this is, of course, a truly cool find! Even moreso as every one of the series it discusses actually did make it to the US at one time or another! Never liked the AVENGERS-like CHAMPIONS and although I appear to be in the minority, I always found UFO quite dull. The others are all fond memories, however, with RANDALL AND HOPKIRK (DECEASED)--shown in America as MY PARTNER, THE GHOST--a particular favorite as I only recently discovered it on DVD from...the Public Library!
Posted by Booksteve at 7:13 PM