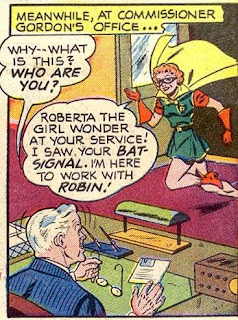 Robin, the Boy Wonder, as we all know, is a dick...but in this case I do not mean Grayson. This 1950 solo ROBIN story is 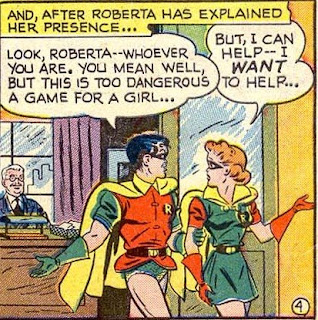 from that series' relatively long run in STAR SPANGLED COMICS and features the only appearance (as far as I know) of Roberta, the Girl Wonder! The reason that this is Roberta's only appearance is, as previously stated, Robin is a dick.
Y'see, Mary, this girl in Dick Grayson's class at Gotham High, has a crush on Robin and she logically decides the best way to win his heart is to become a helpmate--a masked crimefighter herself! After spending, oh, a couple of weeks at least in training and studying, she sews up a costume and looks vaguely like Merry, the Girl of 1000 Gimmicks who appeared in her brother the Star-Spangled Kid's strip in earlier years. She even has a gimmick-filled compact (She's a girl. Get it?).
Somehow, she knows that Batman is out of town (as he often was in this series) so, upon seeing the bat-signal, rushes to police headquarters to meet and assist her 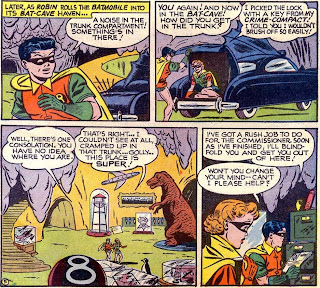 dreamboat. Robin (being, as we've said, a dick) is not amused and makes a point of explaining to her that, well, SHE'S A GIRL! And girls, of course, can't fight crime!
Even though he still seems a bit young to have a license, the boy wonder drives the Batmobile back to the Batcave only to find that Roberta has hitched a ride in the trunk! HAH! Still not overly impressed with her f 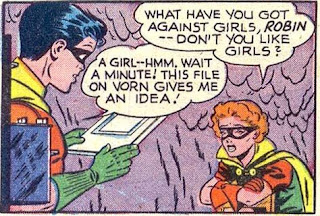 eat, Robin ignores her and goes about his business leaving her to play the Wertham card as she poutingly accuses him of being gay! "What have you got against girls, Robin? Don't you like girls?"
Not wanting to play into the gossip, he decides to use her as an undercover assistant, setting her up with a rubber mask and getting her jobs as a carhop, an usherette and a

girl from the telephone cleaning service (WTF!!??). Eventually, she wears our Dick down and they go on a costumed superhero picnic. She pleads to see him without his mask and Robin actually agrees...pending the Dark Knight's approval, of course.
The next day, Robin has Roberta back in her rubber mask and sends her into a grocery where he becomes suspicious of her and sets a trap which enables him to learn her secret identity as his classmate, Mary. Duh! She was perfectly willing to unmask for you a page ago, stupid, but YOU decided to wait and bring Bruce into it and now THIS! Sigh. Now, Robin is convinced that any crook could have done what he did and discover her identity so he knows he can nev 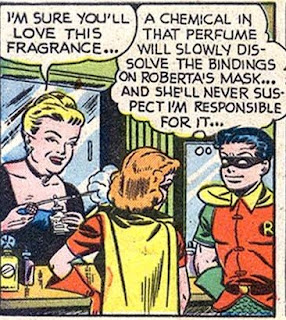 er, ever trust her.
Ummm...huh? Couldn't we say the same thing about her sneaking into the Batcave? Hmmm...?
Robin decides to do what, to him, is apparently the only logical thing. He sneaks a bat-chemical dissolvent into the perfume at the store he takes her to so that when it's sprayed on her by the saleslady, it will cause her mask to dissolve in public. Such a nice guy, that Robin! By sheer coincidence, a TV camera crew is waiting outside and anxious to interview the popular crimefighting team of Robin and Roberta (wonder what Batman was thinking about all of this?). You can guess where this is going. Her mask dissolves on-camera and reveals her as Mary on live TV! Her crimefighting career is over! Of course Dickie doesn't seem to give any thought to the criminals who now might go after her just for revenge or to get to him! Oh, no. He's too busy consoling her by telling her its a good thing she hadn't learned too many of HIS secrets so he at least can still go on fighting crime! Mr. Nice Guy! What happens when she stops to question how that stuff melted her mask in the first place? Hmmm...? In the end, as Mary decides that at least it was fu 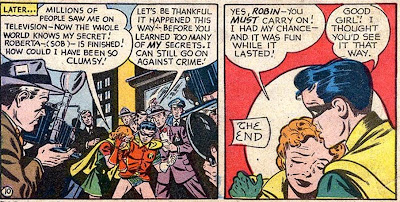 n while it lasted, Robin patronizes her with, "Good girl. I thought you'd see it that way." OMG! He's such a...you know.
Note also that the final word balloon in the story ends with a period at a time when comics sentences, at least at National, ALWAYS ended in an exclamation point! A period! Is that supposed to be another less than subtle hint that GIRLS aren't suited to fight crime? Wait'll he meets Wonder Girl a few years later.
Some nifty Jim Mooney art on this less than politically correct tale of Robin the Sexist Wonder.
Posted by Booksteve at 5:13 AM