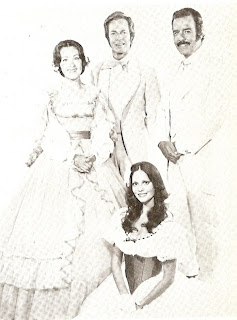 For the first of this new series, we present a brief look at a legendary train wreck of a stage musical--1973's GONE WITH THE WIND! Strangely enough, this had originally been a Japanese production--a 4 hour Japanese cast play entitled SCARLETT with songs by Broadway veteran Harold Rome (PINS AND NEEDLES, I CAN GET IT FOR YOU WHOLESALE). It was cut drastically in a new book by the recently deceased Horton Foote when it opened in London with the more familiar title, GONE WITH THE WIND. The great Harve Presnell essayed the role of Rhett Butler but UK actress June Ritchie received the best reviews as Scarlett O'Hara.
Inevitably, someone 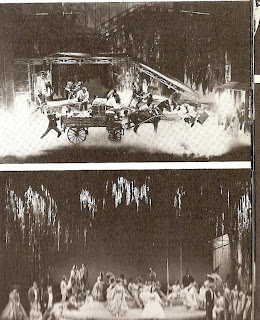 got the bright idea of mounting it on Broadway. Tryouts were held in Los Angeles and San Francisco beginning in August of 1973 with tweaking here and there for the entire run. Pernell Roberts was a handsome Rhett Butler in a nice-looking toupee. Although not known as a singer, the legendarily "difficult" actor had, in fact, sung on several episodes of BONANZA and released at least one album. Lesley Ann Warren, who WAS known for musicals, was well-cast as Scarlett. Character actress Udana Power was Melanie with Terence Monk (whom I would see opposite Lucie Arnaz in SEESAW a few years later) as Ashley. Theresa Merritt who would, the following year, have her own TV series with THAT'S MY MAMA, played the controversial Mammy role.
With nearly 30 songs in two long acts--one of which included the burning of Atlanta, the play never really clicked with audiences. GONE WITH THE WIND, in spite of the constant tweaking, closed out of town after less than three months, never even making it to its scheduled Broadway run.
Posted by Booksteve at 9:22 AM