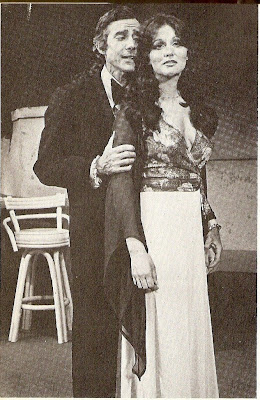 No matter how you look at it, Linda Lovelace was a tragic figure on an epic scale. Her rise and fall in the public consciousness was discussed in some depth by Joe-Bob Briggs at the time of her 2002 death and it can be found here: http://www.nationalreview.com/comment/comment-briggs042502.asp. In short order she went in 1972 from a drug-addled "free spirit" who may or may not have been forced into prostitution to the toast of the town as the epitome of what was then called "porno chic." She hobnobbed with A-list celebs from Sammy and Frank to Hef to Linda Blair. Trying for a legitimacy that was simply beyond her limited and rather specialized talents, she appeared in a couple of flop R-rated pictures. After that, she made an ill-advised attempt at cashing in on her infamy by appearing in dinner theater sex farce. Specifically, she had a very brief run in Philadelphia in PAJAMA TOPS beginning in late 1973 (slightly more than a week), a traditional comedy of sexual misunderstandings. Based on an older French play, PAJAMA TOPS had been a minor success in various stagings over the years but the bottom line was sadly that Lovelace, appearing as the potential mistress "Babette LaTouche," simply couldn't carry her weight. It's a fun part later carried off slightly better in a filmed version of the stage play by--of all people--Pia Zadora. At leas

t one online report has the desperate Linda resorting to her old prostitution ways offstage during the brief holiday run (and being scammed by a bunch of well-to-do welchers at that!). She married her last husband around this time and when the play flopped she retired from show business. Several years later she would turn up again with her books full of controversial allegations. By the time of her car crash death, however, she was reported to be making money selling signed photos on the autograph circuit. For the star of what would be easily one of the biggest money-making films of all time (if anybody ever had any legitimate figures on how much money DEEP THROAT had made) Linda Lovelace never really made any money in show business at all.
Absolute trivia--Broadway and TV vet Dick Patterson (top picture) who had the male lead in PAJAMA TOPS had earlier in 1973 appeared on HERE'S LUCY as a character named...STEVE THOMPSON! It was the very first time I had ever heard of anyone with my name!
Posted by Booksteve at 1:23 AM