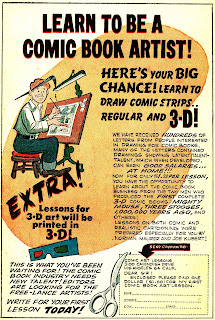 One of my favorite defunct comic book companies was St. John which lasted throughout most of the 1950's. During this time, their main claim to fame was that they did the very first 3-D comics. They also published Joe Kubert's TOR, a MAD-like THREE STOOGES comic and WHACK, in my opinion the best of the Kurtzman-era MAD imitations. Kubert, as one of the companies main artists, often teamed with cartoonist Norman Maurer who had worked on the original DAREDEVIL comics in the forties. Together, the two of them actually appeared "on camera" quite a bit in an effort to create an identity for themselves similar to what Gaines an 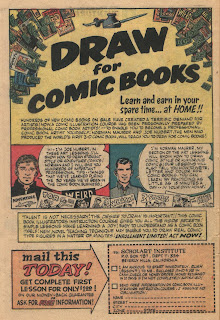 d Feldstein had done at EC.
Something else they did, however, is to run ads like the ones seen here, apaprently attempting to supplement their income by giving art lessons. Since Joe would go on to establish his long-running, highly respected "Kubert School." I'd have to say that these ads highlight the beginnings of Joe's teaching interests. Don't know how much interest Maurer had. He married Moe Howard's daughter and established companies to control the Stooges' career, eventually moving into production of their films. He would from time to time return to comics briefly to work on Stooge properties (in a much more simplified style) and died in 1986. Joe Kubert continues going strong to this day and could easily be said to be the Grand Old Man of Comics! His actual sons, as well as his figurative sons who graduated his art courses, have spread out across various art fields and all represent his legacy. All because of a few 1950's ads like these.(http://www.kubertsworld.com/kubertschool/KubertSchool.htm)
Posted by Booksteve at 7:15 AM