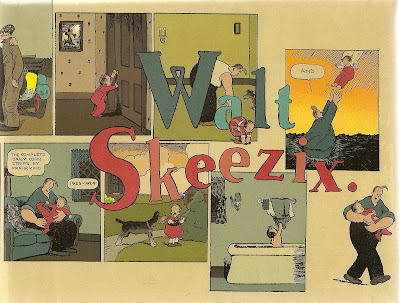 Like most youngsters my age, my mother would always read me the Sunday funnies. One of my favorites was GASOLINE ALLEY, not because of the involved storylines but because of the friendly looking characters with funny names and the colorful Sunday art. The strip celebrated its 90th anniversary this past November! In the early 1980's, I began clipping and collecting the daily and Sunday strips (then by Dick Moores) and got several years worth before losing interest. The basic story has always been the tale of Walt Wallet and his family. Initially a chubby bachelor, Walt found a baby left on his doorstep in 1922 and named him Skeezix! In the decades since then, Skeezix grew and had kids and his kids had kids, etc., etc. Always filled with a gentle, genuine whimsy, the storylines could and still can sometimes get more serious.
The other day, I found one of the recent series of Drawn and Quarterly GASOLINE ALLEY reprint volumes at my local Public Library (right next to WATCHMEN and KABUKI in a timely graphic novels display) and devoured it! I need to see if they have the other volumes now! Creator Frank King creates a well-rounded, self-contained little world for Walt and the newly arrived Skeezix. There is humor a-plenty but serious issues of adoption and kidnapping are dealt with also along with a genuinely exciting cross-country car race! Skeezix in 1923-24 may well have been the cutest and most realistic comic strip child of all time! This being nearly a century ago, there is some political incorrectness one must put into its historical context (I sound like Leonard Maltin on a Disney DVD!) but the classic art and addictive storytelling style more than make up for it. I need to see if they have the other volumes at the Library! I strongly suggest you do the same the next time you're just looking for a good book!
Posted by Booksteve at 2:15 PM