Alan Moore on the WATCHMEN Movie-1987 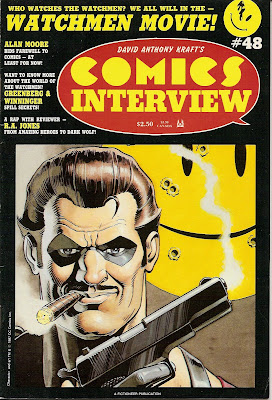 Now THIS I find interesting. Behind its Dave Gibbons Comedian cover, this 1987 issue of David Anthony Kraft's COMICS INTERVIEW features a nice interview with WATCHMEN co-creator Alan Moore conducted by one Darryl Boatz...who if I recall correctly was the gentleman who would go on to interview ME for my COMICS INTERVIEW piece about 56 issues later! In this piece, Moore enthuses about Sam Hamm as the screenwriter to Fox's proposed WATCHMEN film. We have a copy of Hamm's unproduced screenplay here at the Library and I plan on digging it out after I see the movie that DID get made 22 years later! The author rightly contends--as he has again more recently--that WATCHMEN was designed as a comic and therefore works best as a comic. "I mean," says Moore, "the film might be even better in its own way but I think that because we did try consciously with WATCHMEN to come up with effects that no other medium could duplicate, and to establish a range of effects that were unique to comic books, then I think that it would be to some degree pointless to do it as a novel--and although I'm interested in seeing what is done of it as a film, you know, I would say that even there...I think that sort of it will be different. It can't be the same thing because I don't think the thing as it stands is translatable." (Wow! That first one was quite a run-on sentence from comics' all-time best writer!) More recently, Moore has requested that his name be removed from WATCHMEN-related products so artist and co-creator Gibbons is getting all the notice from the uneducated masses. Alan Moore has shown no interest in previous film adaptations of his comics including FROM HELL, THE LEAGUE OF EXTRAORDINARY GENTLEMEN and V FOR VENDETTA. His eccentricities seem to have grown with his success and he sees the disassociation as some sort of moral victory. I hope he does see the WATCHMEN film that finally materializes at midnight tonight. Love it or hate it, I'd love to see his take on it.
Posted by Booksteve at 9:51 AM