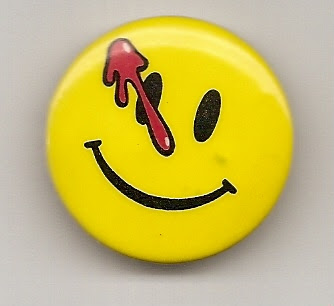 During the closing credits of WATCHMEN today, a twenty-something theater manager came up to me, wife Rene and Brittany Rose (http://brittanyrosepictures.blogspot.com/) and asked how we liked the film. As we were, as often happens these days, the only ones left in our seats at that point, we got into a discussion of it with him. I was astonished to hear that his unofficial "exit poll" had found no one but us who cared for it! No one! Of course, outside of the midnight showing, this had only been the second show of the day and there were barely twenty folks in the theater. Still...
Personally, I loved it. There were parts of the book I missed (Hollis Mason's fate), a few things that didn't make much sense (why did all these non-super humans seem to have super-strength?, How was ANY of NYC left after the ending?) and I wish they had used Elvis Costello's song THE COMEDIANS which was quoted in the book. On the other hand, what's there is scrupulously faithful to the spirit of--and in quite a few cases--to the very letter of the original. Visually, it is absolutely stunning and moreso because many of the shots almost literally leap off the page to the screen. Where the plot has been streamlined or changed I honestly think it's for the better. Most of the hard-hitting stuff is left intact, from the stupefying violence to the multi-level moral dilemmas.
As far as the actors, they are uniformly good with special kudos to Jeffrey Dean Morgan as the Comedian and Jackie Earle Haley as Rorschach. Morgan somehow manages to give a humanizing touch to Edward Blake--and nearly all in flashbacks yet!--that was just not inherent in the book. He's still an incredible asshole but you get a real sense of understanding that's neither present nor needed in the original but which adds helpful depth here. Haley immerses himself in his character to a degree that you almost wish you could see him in a solo Rorschach film (PLEASE!! NO SEQUELS OR PREQUELS!!). He is intense and oh so perfectly cast.

Much of what makes WATCHMEN WATCHMEN still and always will work better on the printed page. It's a book that offers new things in every reading and takes full advantage of the unique medium of comic books. That said, director Zack Snyder has presented us with a complimentary variation on the theme(s) and in HIS chosen medium, I cannot imagine a better version than this one. WATCHMEN is a well made movie that suffers most by an apples and oranges comparison to its source material.

By the way, Brittany Rose had read only the first few issues of the comic and was nonetheless able to follow the storyline with no issues. Seen here (and worn today) is my vintage WATCHMEN pin, dug out of retirement for its first public appearance in two decades!
Posted by Booksteve at 7:31 PM