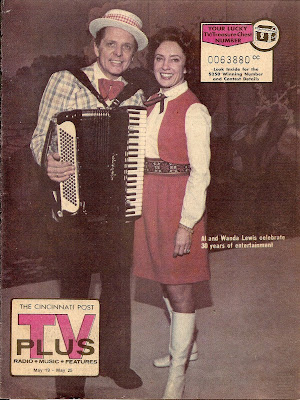 In the earliest days of television, nearly every city had its own chldren's programming "host." In some cities, they interacted with kids and in others they just introduced cartoons or taught magic tricks. Sometimes these hosts were clowns or cowboys or firemen or sailors. In Cincinnati, it was everybody's uncle...Uncle Al.

THE UNCLE AL SHOW began in 1950 and was on five (sometimes six!) days a week for thirty-five freakin' years! Every episode was live for many, many years, always with an audience of about 50 kids, ages 2-10! Unlike on HOWDY DOODY, these kids weren't expected to sit the whole time in a "peanut gallery." Oh, no...they would follow Uncle Al around his farm set or his circus set as he greeted various animal, puppet and robot friends. Along the way each day, he'd also meet up with his sidekick (and real-life spouse) Captain Windy. Sometimes they played loud, raucous games. Sometimes they did pantomime. Other times the kids learned manners or ABC's or the Pledge of Allegiance. ( My mom about passed out when two year old me ran into the kitchen and sang her the alaphabet song for the first time!) There was a lot of music from Uncle Al's ever-present full-size accordian and dancing kids were everywhere, all vying for Uncle Al's personal attention every single moment! I've heard he could be a bit grumpy. You try doing a show like that with an accordian on one shoulder and usually a kid on the other for that many years and I'll bet you'd be grumpy sometimes, too!
Unlike thousands upon thousands of other Cincinnati area kids, I n 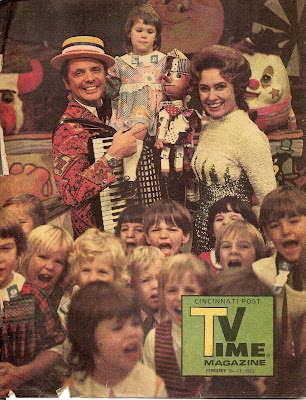 ever got to appear on THE UNCLE AL SHOW but I loved him nonetheless, watching it faithfully well past the point I should have "outgrown" it. My cousins were on it, my best friend was on it (her brothers, too!) and at least four other people I still know were also on it! I did get to see Uncle Al and Captain Windy in person on two occasions. Once, when I was about 4 years old, they flew into a nearby department store parking lot (ironically about 2 blocks from where I now live!) dropping styrofoam "snowballs" from a helicopter at Christmas. (I've often wondered if this inspired the famous turkey episode of WKRP IN CINCINNATI.) The other time was when I was about 13. It was on the very last day of Cincinnati's Coney Island amusement park when the two appeared in a musical revue spotlighting their four daughters.
In the late 1990's, THE UNCLE AL SHOW was briefly revived in Saturday mornong reruns and son bookdave became a fan, also! This past year, I had hoped to get to finally actually meet Uncle Al at the launch of the CINCINNATI TELEVISION book but his health precluded it. He did, I am told, appear at a later event for the book though!
THE UNCLE AL SHOW was only briefly aired on the network in the mid-fifties but he influenced CAPTAIN KANGAROO and hundreds of other national and local kids' shows. Locally, he was a smiling, handsome, caring, funny man who influenced so much more in the Cincinnati market.
Uncle Al Lewis died on Saturday at the nearby farm he retired to in 1985. Thanks for always being there for us kids, sir! That's what it's all about!
Posted by Booksteve at 8:22 AM