The Colour of Magic 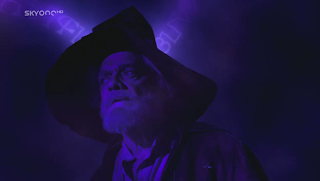 British author Terry Pratchett, for those out of the loop, is and has been for many years to Fantasy what the late Douglas Adams was to Science-Fiction. His Discworld novels have long been fan-favorites and these

days regularly hit the US Bestseller lists. Awhile back, I purchased HOGFATHER, a 2 part UK TV movie based on one of the later Discworld books and enjoyed it quite a bit. More recently, I've had a chance to watch the paradoxically newer 2 parter based on th

e first two books, THE COLOUR OF MAGIC and THE LIGHT FANTASTIC! It's even better. The problem with any of these types of shows is the pacing. As a 2 parter, it can sometimes seem a bit leisurely and episodic. That didn't for a second keep me from enjoying this colorful concoction immensely!

The story takes place in a world much like our own a few centuries back...except that it's flat and is carried on the backs of four elephants who are standing on a giant tur

tle travelling through space. There's also magic, dragons, assassins and a personification of Death voiced by the great Christopher Lee (who had previously voiced him in several UK animated Pratchett projects).
The plot in this

one deals with Twoflower, a rich, lucky but naive tourist and Rincewind, a disgraced wizard in training who's appointed his guide. Jeremy Irons appears as does Tim Curry chewing the scenery as the main villian. Sean Astin stars as Twoflower. The major role of Rincewind goes, perhaps surprisingly, to David Jason who co-starred with Graham Chapman in THE ODD JOB b

ut is better known as the voice of cartoon characters DANGERMOUSE and COUNT DUCKULA. Well, perhaps NOT so surprisingly as Jason had also appeared in a different role in HOGFATHER and is listed as a Producer on this one! He gives the role a quirky, fidgety, mumbling, cowardly performance that delightfully steals every scene he's in, even with such legendary scene-stealers as Curry around. Nigel Planer (hippie Neil from THE YOUNG ONES) appears as seperate characters in both movies, also.

It is episodic but then so are the books. The special effects are well above

those in the average TV projects and the humor is consistent and genuinely funny...and British. The characters are bizarre, too. A particular favorite is Cohen the Barbarian, an aged legendary warrior who is still a force to be reckoned with...especially after he gets his new choppers! Then there's the luggage..an anthropomorphized trunk with legs that follows its owner everywhere and saves the day more than once.
All in all, if you're a fantasy fan with a sense of humor, I strongly recommend seeking out THE COLOUR OF MAGIC (and also HOGFATHER) for a fun and enjoyable evening or two with some unique characters.
Posted by Booksteve at 9:18 AM