Batman and Robin in Buckskin? 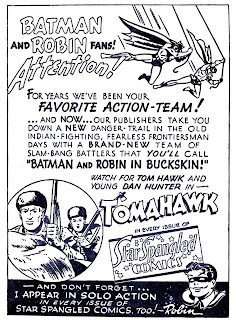 This ad has Batman introducing readers to the new TOMAHAWK feature in STAR SPANGLED COMICS by referring to Tom and sidekick Dan Hunter as "Batman and Robin in buckskin!" Take a look at Dan, however, and you'll note he looks female!!! As if Wertham needed MORE evidence, here's the Caped Crusader comparing himself to a guy who apparently runs around with an underage transvestite...in leather yet! Let's not even get into the implications of Robin appearing in "solo action."
Posted by Booksteve at 11:05 PM