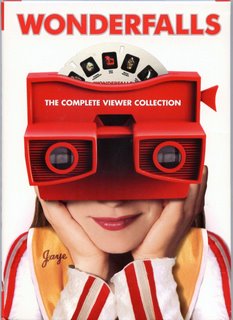 As one cannot live in the past forever, I occasionally try new television shows. This, unfortunately, is often the kiss of death for said shows. One such situation—has it been nearly two years now?—was WONDERFALLS. After watching the highly touted debut, I was simply enchanted. It was TRU CALLING and JOAN OF ARCADIA without the angst and with a madcap, quirky sense of humor. I loved every second of the first episode and watched it again when Fox aired it a second time to pick up more viewers. Couldn’t wait for the second episode! In spite of mostly rave reviews, though, the campaign to "Save WONDERFALLS" began soon after the second episode’s ratings plummeted. The show was cancelled after episode four.

It’s my considered opinion that WONDERFALLS was too hip for the room. Lots of pop culture references such as a tiny wax lion singing Michigan J. Frog songs and a potential arsonist singing the theme to THE FACTS OF LIFE under her breath as she wraps a victim in duct tape are the first couple that come to mind.

It’s also a very adult show, not skimping much on the curse words and featuring some of the most sexually explicit scenes I’ve ever seen on a show made for non-cable TV including a running gag—pardon the expression—blowjob shown several times over several episodes in flashbacks. It’s okay, though. Seriously. It really IS integral to the plot!
Said plot, by the way, features Jaye, a young "slacker" working in a Niagara Falls gift shop who suddenly finds inanimate objects talking to her and telling her to do things. When she refuses, they make sure she changes her mind one way or another. Ultimately, she comes to reluctantly accept that they are prompting her to do good things but inevitably, in a roundabout way, that gets her in big trouble first. Along the way, we deal with her dysfunctional but loving family, her best friend (who eventually starts a secret relationship with Jaye’s brother), her psychiatrist and her sort of boyfriend/sidekick whose cheating wife (FIREFLY cutie Jewel Staite in several episodes) may or may not be trying to poison him. Hmmm. Doesn’t sound all that interesting to me just writing it out like that.

Still, absolute winning performances all around make the series. Caroline Dhavernas as Jaye is an amazing , delightful discovery. Her comic timing is some of the best I’ve seen in ages. Most of her work has been Canadian but hopefully she’ll continue to get a wider audience. William Sadler and Diana Scarwid are perfectly cast as Jaye’s mother and father, screwy and screwed up on their own but both given more depth as the series progresses. 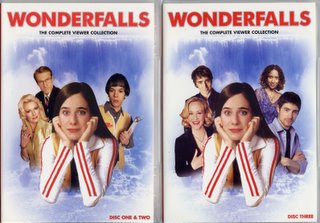 The loyal fan base rallied on the Net and somehow got Fox to agree to release this failed series on DVD fairly quickly, complete with all 9 originally unaired episodes! Not only that but they went all the way with the extras, offering documentaries, a music video of the memorable theme song, the usual cast bios and multiple episode commentaries from Dhavernas along with various writers, producers and co-stars (including the marvelously named Scotch Ellis Loring who appears not only as the psychiatrist but as the voice of the wax lion that starts the whole thing.)

Since HOUSE has lost its momentum, I still say that WONDERFALLS is the best series I’ve seen on TV in recent years. If you don’t want to buy it get your local public library to order it in or watch for it turning up now on TV on obscure stations in different parts of the world. You’re in for a twelve hour treat whenever you find WONDERFALLS.
Posted by Booksteve at 11:20 AM