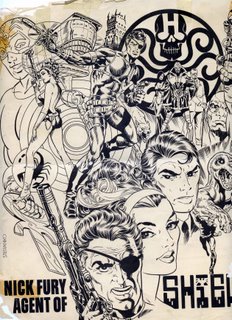 I don't recall for certain where I got this black and white Steranko poster but I believe it was for subscribing to COMIXSCENE (which became MEDIASCENE, which became PREVUE which became VUE which...who knows? My subscription expired back around 1982.), Jim Steranko's tabloid newspaper of comics, paperback and movie news. It was, however, originally done as a poster for Marvelmania and is probably the most cinematic of all of the artist's Marvel pieces. Can't you just see young Paul Gulacy (also a favorite of mine) lovingly copying every line of this poster as he learned to draw? Certainly his later MASTER OF KUNG FU splash pages often recalled this art with their movie poster layouts. Steranko's storytelling was unique in its day but if anything, it was bettered by his amazing sense of design that has since been incorporated into our pop culture. Mystery, evil, sex, monsters and heroism. It's all right there. This evocative illustration of the ultimate spy craze comic book epitomizes the artist at his best.
Posted by Booksteve at 8:21 AM