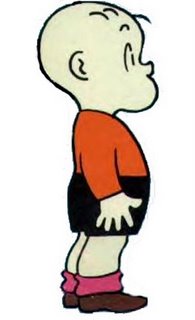 Complete collections of CALVIN AND HOBBES and THE FAR SIDE are great. Multi-volume reprints of PEANUTS and DENNIS THE MENACE are well deserved but dare we hope that this trend might someday lead to THE COMPLETE BARNABY? Imagine all ten years of the original run of the late Crockett Johnson’s well loved but little seen comic strip all in one place! Let’s even throw in the full run of the ill-advised early sixties revival which was perhaps attempted as a tie-in to the TV series that never came about (As I understand, it starred Bert Lahr and little Ronny Howard!).
BARNABY creator Crockett Johnson’s place in history is assured by the fact that he also wrote and drew the classic children’s book, HAROLD AND THE PURPLE CRAYON, as well as its various original sequels. Still, this keeps mention of BARNABY coming up whenever his accomplishments are written about and yet BARNABY is nowhere to be seen!
To say BARNABY was unique among humor strips would be an understatement. Much of the humor in other 1940’s comic strips was inspired by radio and/or vaudeville. Johnson told comics historian Rick Marschall that he was inspired by the literary wit of Dorothy Parker, Robert Benchley and the films of Frank Capra. Johnson’s ultra-clean drawing style and typeset lettering (to allow for more words) also gives the strip a unique visual look. In other words, it wasn’t like other comic strips so the average reader really didn’t "get" it.
Oh, BARNABY was beloved by the intelligentsia, the cognoscenti, and the hipper than hip crowd. In fact Dorothy Parker wrote a somewhat legendary "mash note" that was used as an introduction to one of the reprint books.
What was BARNABY? Well, at its heart, it’s a simple story of a little boy and his blustery, inept and very Irish fairy godfather, Jackeen J. O’Malley. After that, it gets complicated. There’s Gorgon the talking dog, Gus the Ghost, Barnaby’s friend, Jane, and his well-meaning but clueless parents who think their son’s biggest problem is his overactive imagination. There’s a haunted house, a hot coffee ring, a witch and O’Malley’s surprisingly successful run for Congress!
"Gentle," "whimsical," "intellectual" and "droll" are words used by the strip’s fans. "Dull," "long-winded" and "boring" are words used by the strip’s detractors. The original run lasted from 1942 to 1952 with a couple of nearly unprecedented hardcover collections coming out during the War. Dover Books, a story in themselves, kept reprinting them in paperback well into the sixties (seventies? Hard to tell with Dover) 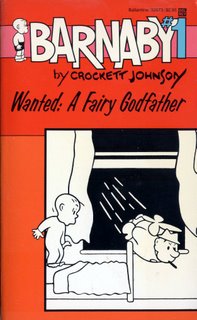 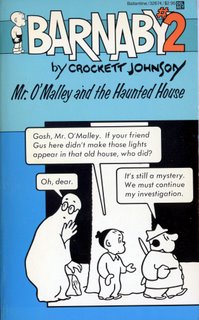 In the early eighties, Del Rey books, a science-fiction imprint of Ballantine run by authors Lester and Judy Lynn Del Rey announced a twelve volume paperback reprint series. Highly touted in the TBG (or was it CBG by then?) by Don and/or Maggie Thompson, I made a point of ordering them in for the bookstore I managed at the time…but they didn’t sell. Oh, I devoured MY copies and couldn’t wait for the next ones but I’d be real surprised if we ever sold more than one or two more copies. I was worried that the project might be cancelled mid-stream. 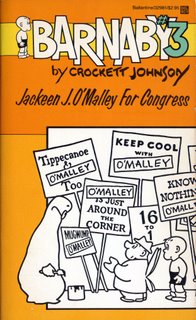 Then I read where Judy Lynn Del Rey had championed it and committed to publishing all twelve volumes no matter what! I was relieved…until she sadly died not long afterwards and Ballantine pulled the plug on BARNABY and several of her projects. I had to strip out and return all of the unsold paperbacks (I always rationalized this destruction by telling myself that it made my own copies all the more valuable). 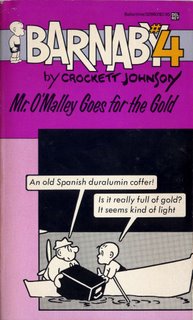 BARNABY resided in limbo again until COMICS REVUE began reprinting the revival strip in 2000 with little fanfare and unfortunately little interest. Then the second volume of Art Spiegelman’s ambitious, oversized LITTLE LIT series for children offered a colorized, short story version of the original early strips! Little kids undoubtedly recognized the style from HAROLD but, of course, had no idea that Barnaby’s adventures went on much longer than Harold’s few books.
Around that same time, Harold got his own HBO series and new books were done, illustrated by others in Crockett Johnson’s now classic "clean" style. Right now, another Johnson children’s book, MAGIC BEACH is being reissued with previously unseen illustrations. As long as he stays in the public eye, there’s always a chance we’ll be waking up one Christmas to THE COMPLETE BARNABY.
As for me, I have a special affinity for BARNABY. 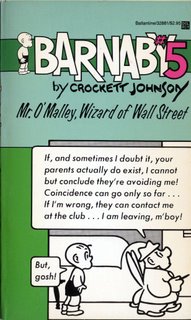 In fact, my previous, failed attempt at a blog was entitled "BARNABY POP." I don’t have any tattoos but last year I came close to getting the image of 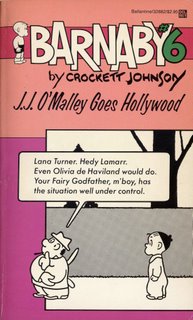 Barnaby at the top of this page tattooed on my upper arm. "Barnaby" is even the name under which I…uh, no. Better not go there right now. Bottom line: I love BARNABY just as much as did Dorothy Parker! Find it! Try it! You may love it, too!