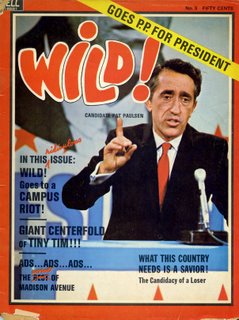 The problem with most humor mags is that they aren't funny. I realize that what's funny to one person is not necessarily funny to another but in this case I literally mean that they simply aren't funny! This explains why only a handful of the hundred or so magazines that have tried to duplicate MAD over the years have attained any kind of success at all. There was a time when my Library had a rather extensive collection of humor magazines-MAD, PANIC, CRAZY, INSANE, RIOT, UP YOUR NOSE AND OUT YOUR EAR (I'm serious!) but they were painful to look it so most of them were sold off to comic shops as dollar box fodder. One that we kept was WILD. WILD was a 1968 "hip" humor mag put out by Dell, the people who had previously brought you Walt Kelly and Carl Barks. Here you have Chic Stone, Jose Delbo, Henry Scarpelli and the ever-popular Tony Tallarico illustrating spoofs of the Smothers Brothers 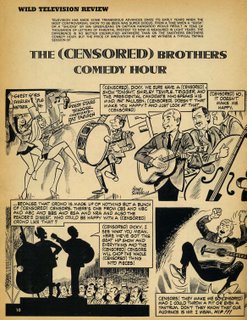 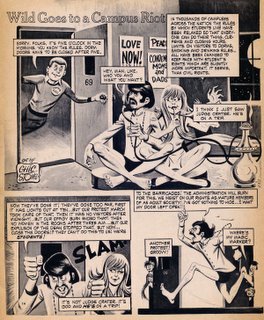 written by writers who apparently wished to remain anonymous. You know that the writers weren't particularly young and hip, however because of the hippie chick's Judge Crater joke. Crater had disappeared in 1930! An interview with perennial presidential candidate Pat Paulsen appears as does a black and white centerfold of Tiny Tim, 1968's man of the year( How popular was Tiny? He even appears on the Beatles' Christmas record that year!!! That's how popular!). It's not great. Certainly the writers are not Kurtzman or even Joe Simon (from SICK) and the artists not Elder or even Severin (from CRACKED) but I laughed...and that's more than I do with most of these so called humor magazines! 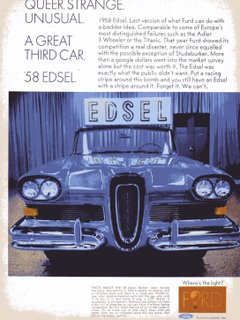 Posted by Booksteve at 8:59 AM