The Doctor Who You Never Saw 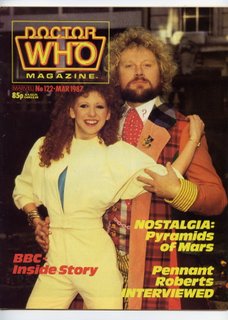 Taking up lots of room here at the Library are DOCTOR WHO magazines and videos. We're big fans of The Doctor around here, having discovered him waaayy back in the sixties via TV viewings of Peter Cushing's two fun but completely apocraphyl feature films.

Anyway, there will undoubtedly be more about The Doctor here later, especially with the upcoming appearance of the NEW Doctor (I LOVE the Eccleston series!), but today, I just wanted to share this DOCTOR WHO MAGAZINE cover from 1987. Here we have Colin Baker, Doctor number six, as we never saw him! Baker's time in the role was problematic behind the scenes and during one hiatus, negotiations for him to return just long enough to "regenerate" into Sylvester McCoy broke down and he was essentially fired. Prior to that, however, when he was still expecting to return, a bearded (and somewhat larger than before) Baker posed for some publicity shots with his then co-star, Bonnie Langford offering a brief glimpse into what might have been.
Posted by Booksteve at 11:42 AM