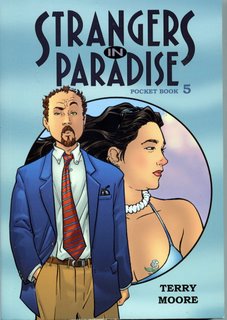 One of my favorite Christmas presents this year is the latest STRANGERS IN PARADISE pocket book (#5). I discovered writer/artist Terry Moore’s comic book series last year after HarperCollins published an LP sized behind the scenes book that caught my attention. The Eisner and Rueben award winning SIP is without a doubt the most adult comic (in the true sense of the word) being published today. Honestly, I find it hard to believe that this book is successful in today’s market with no super heroes, no giant monsters, no aliens and no talking ducks. What it is about is…well…hard to explain, actually. At its heart it’s a love story, beautifully delineated in a wide and sometimes bizarre variety of styles by the quietly brilliant Moore. Hmmmm…or is it a Tarantinoesque gangster story, detailing the violent history of an organized crime group run by highly trained female assassins? Humor! That’s it! It’s the hilarious misadventures of two women and the men that love them. Of course, it’s also a fascinating treatise of pop philosophy. Y’know, reading and enjoying STRANGERS IN PARADISE is a hell of a lot easier than explaining it!

Moore has an absolute gift for creating realistic characters and the series ultimately defines even the most minor characters in complicated real world terms. Our heroine, if you can call her that, is one Katina Choovanski or "Katchoo." Katchoo is an artist with a past. Katchoo loves Francine…and David. David is NOT who Katchoo thinks he is. Francine loves Katchoo but marries someone else...after she sleeps with David. Katchoo’s ex-lover, Darcy, turns out to be David’s incestuous sister. David has sex with Katchoo’s assassin sister in order to get her pregnant. Francine’s ex, Freddy, marries Casey who divorces him and moves in with Katchoo. Francine’s conservative mom turns out to have been a Betty Page type model. Katchoo’s own model turns out to be an FBI agent. It’s been like this now for more than a decade! 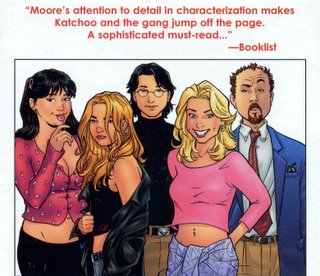 Soap opera stuff to be sure but the art! Oh, the beautiful art. Some issues are clearly manga-influenced, others are just as clearly defined by Victorian illustration. Most offer pin-up quality pictures of pretty girls but none emphasize anything but the inherent beauty in the female form.
Speaking of females, Terry Moore is, along with Phil Donahue, one of those rare men that understands women. His women, young and old, are real and the things that make them women come through almost effortlessly from these pages.

Poetry, quotations, song lyrics, prose, art and a judicious use of color all combine in one long, amazing, violent, beautiful, hilarious, sad and incredibly frustrating story to which we already know the ultimate outcome. Hmmmm. When you put it like that, I guess Terry Moore has captured life on paper.
Here’s a link to Terry Moore’s official website: http://www.strangersinparadise.com/ Go look at the beauty of Francine and Katchoo. Then go read some STRANGERS IN PARADISE.
Posted by Booksteve at 9:14 PM