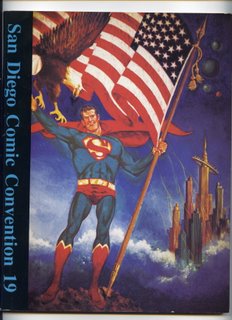 Remember! Wayne Boring is the one who drew the key correctly! Perhaps best remembered for his trademark "Superman walking on air" pose, artist Wayne Boring began as an early assistant to the Man of Tomorrow's co-creator, Joe Shuster. After drawing long runs of the SUPERMAN newspaper strip in the forties, he emerged as the definitive Supes artist of the fifties only to be overshadowed by Curt Swan's much neater, cleaner version in the sixties. By the time I was reading comics, Boring's work looked antiquated in its infrequent appearances. Like most artists, his output became more stylized in later years but by the time he arrived at Marvel in the early seventies (might have been '69, actually) his CAPTAIN MARVEL art looked like somebody's idea of a joke! Only with time and wisdom (hah!) did I come to appreciate Boring both for his storytelling skills and his unique art style. Here's a quick look at a rare Wayne Boring painting of Superman (owned by Jim Hambrick) from the cover of the 1988 San Diego Con Program Book.
Posted by Booksteve at 1:38 PM