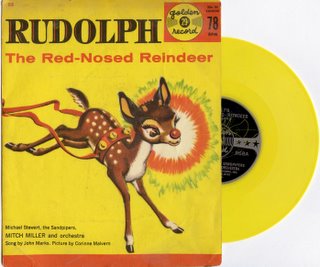 Contrary to popular belief, I do not still own every bit of "stuff" I ever owned. In fact, out of the vast collection of Christmas records I had as a child, only two survive. Oddly enough, one, Rudolph, was my all-time favorite and the other one of those "What were my parents thinking?" things.

For those of you under the age of "Ahem", 40, it may come as a surprise that most children's records used to be yellow. (It may, in fact, come as a surprise that there were such things as "records" but that's a different issue.)They were also, at least in my case, mostly 78's meaning that they played very very fast and it was fun to play them on 45 or even 33 for maximum sound weirdness...when you were seven. This Rudolph is credited to notorious rock and roll hater Mitch Miller (whom I knew from TV's SING ALONG WITH MITCH), the Sandpipers (who I understand were NOT the same group that recorded one of my favorite songs, COME SATURDAY MORNING from the movie THE STERILE CUCKOO) and somebody named Michael Stewart. 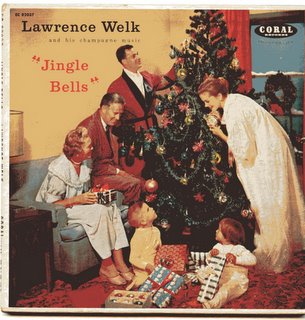 Lawrence Welk was a big band leader known for his mellow "champagne music" back in the forties.By the 1960's he had found a niche market that would carry him through that beloved, tumultuous decade and beyond--seniors! By offering light versions of familiar, non-threatening songs and styles to older folks, Welk outlasted better contemporary big bandleaders. His surprisingly popular TV show lasted in one form or another into the eighties (surviving even Welk's death!) and is still revived in clipfests and nostalgia concerts on PBS to this day! Unbelievable! As I said, to me, as a seven or eight year old kid receiving this record ( an EP yet!) my response then and now: What were my parents thinking!? Why did I keep it? NO ONE WANTED IT!!! I COULDN"T GIVE IT AWAY!!! AARRGGHH!!
Posted by Booksteve at 6:58 AM