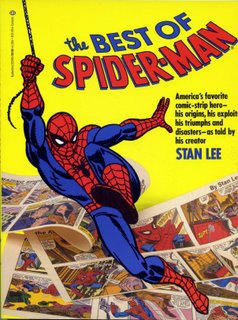 You can argue all you want the merits of Steve Ditko's version of Spider-Man but the bottom line is--he left! The version of Spidey that became beloved by the general public is Stan Lee's version. Certainly John Romita's masterful visualization helped but I've never heard Mr. R claim that he influenced the character in any major way other than looks. Jim Mooney, Don Heck, John Buscema, Gil Kane, Larry Lieber, Alex Saviuk, and later scores of others have all added their takes but all of them have started from Stan's Spider-Man.

This book, THE BEST OF SPIDER-MAN is misnamed. Although it deals exclusively with the syndicated newspaper webslinger that began in the mid-seventies (of which I dutifuly clipped each daily and Sunday strip for several years) it isn't really even the best of that as it leaves out the very different but cool Doctor Doom story. The strip was like an alternate world version of the comic, re-introducing chracters with new twists. Even Peter Parker sported a new, longer hairstyle. Romita drew it beautifully for several years, easily coming to grips with the necessary differences between comic "book" art and comic "strip" art. Stan's stories, given the freedom from any and all official Marvel continuity, were, at least in the beginning, the best he'd written in years. This book also presents a long essay on Lee by Lee, illustrated with many photos. Besides Romita, representative strip stories appear by Lee with his brother Larry Lieber, golden-age artist Fred Kida, and one Floro Dery. Although the stories and the art became slow, boring affairs, due to the character's name recognition, the strip has continued since then with very little notice in an increasingly dwindling number of newspapers.

Although the book came out in 1986, I took my copy with me to San Diego a few years later to get Stan to sign it but I missed my chance. Stan's signing turned out to be in an upstairs room for exactly one hour and there were already what seemed like hundreds of folks waiting on a line that came all the way down the stairs so I opted out. I DID follow Mr. Lee for several blocks later that day as we walked through an outdoor shopping plaza on a very windy day. Quite frankly, I was watching to see if Stan's legendary toupee blew off. It didn't! 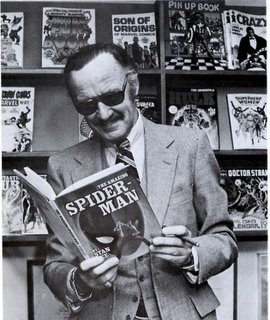 Writer, editor, publisher, marketing whiz and movie star, today is Stan's birthday. I wish I HAD met him that day so I could have told him how much I've enjoyed his work. Happy birthday, Stan. No matter how you look at it, in the end, the true best of Spider-Man...is Stan Lee!
Posted by Booksteve at 9:31 AM