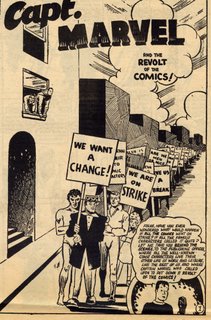 This is Pop! has been running some rare Captain Marvel memorobilia lately so I thought this might be a good time to offer a couple of bizarre Cap tidbits, myself.
Immediately to the left is the splash page to a most unusual Captain Marvel story published only in Canada in 1943 (but reprinted along with various other rare Cap stories in THE BUYER'S GUIDE in the 1970's). In it, various comic strip characters including L'il Abner, Tarzan, Popeye, Snuffy Smith, Dick Tracy, the Phantom and Flash Gordon 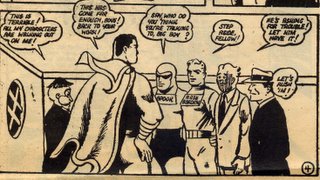 (all slightly pseudonymous) go on strike and it's up to the Big Red Cheese (or in this case, the big black and white cheese as these Canadian comics were printed in B&W) to convince them all to go back to work. 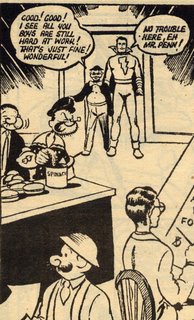 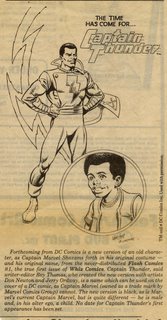 This next bit may well have been discussed in more detail in Roy Thomas's incredible ALTER EGO magazine (I haven't been able to afford to get it for the last couple years) but it was front page TBG news at one point and then nothing ever materialized. Apparently it was a proposal by Roy, with art by the late Don Newton with Jerry Ordway for CAPTAIN THUNDER, an African-American version of CAPTAIN MARVEL!
Posted by Booksteve at 8:53 AM