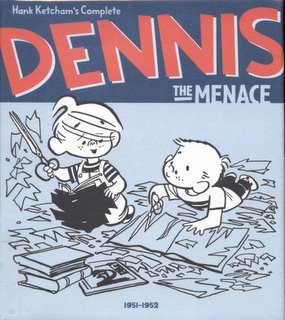 Growing up in the sixties, there was a time when I really wanted to be a magazine cartoonist. Just about every grown-up magazine in the house from FAMILY CIRCLE and READER’S DIGEST to those other ones that my dad thought were well hidden up behind the clock on the mantle had single panel cartoons. Somebody had to be drawing them. Why not me?

According to the just published first volume of THE COMPLETE DENNIS THE MENACE, Hank Ketcham had the same dream. The difference is, he created a national icon and I’m just blogging about it. Following in the footsteps of their COMPLETE PEANUTS project, Fantagraphics (in the interests of full disclosure, my first ever employer as a writer in a long ago AMAZING HEROES) has come up with another perfectly formatted thick little book series to re-present the classic kid comic panels. Patrick McDonnell and Brian Walker offer insights into Dennis’ creator Ketcham and his times but in truth, the panels themselves do the same thing even better, evoking a long gone world of suburban dreams and totally innocent childish devilment. 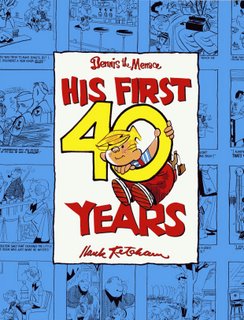 If these early panels make you curious to see where things went, this 1991 book, DENNIS THE MENACE-HIS FIRST FORTY YEARS, offers a nice, decade by decade look at some of the best panels and Sunday strips (including a color section!). Ketcham, like most cartoonists other than Charles Schulz, used assistants and their work is as good or in later years better than his own. They also did the omnipresent Dennis comics. I never followed the Dennis comic books as a child but recently, I’ve been informed that they tend to be quite good, too, so when I get money, I may hit the back issue bins.

Ketcham himself also wrote THE MERCHANT OF DENNIS. Check your local library for that one as I never picked up a copy for some reason. Otherwise, check Fantagraphics' Dennis The Menace page and get THE COMPLETE DENNIS if you love classic, funny comics.
Posted by Booksteve at 10:56 AM