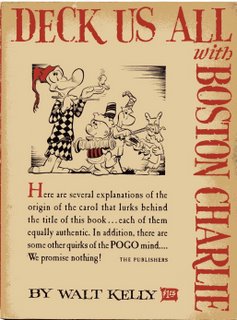 Around my house growing up, it just wouldn't have been Christmas without my dad singing his favorite carol, DECK US ALL WITH BOSTON CHARLIE...endlessly...much to my mother's dismay.

I'm not sure that I knew that the nonsensical take on the traditional DECK THE HALLS came from Walt Kelly's classic comic strip, POGO. I'm also not sure that my dad didn't just make up a lot of the words. If he did, so did Kelly, as the carol appeared annually (and on ocassion off season) and usually contained different verses.

I never "got" the strip as it appeared in the newspapers of my childhood. It was too political, too inside and already too damn small for all of those animals to run around in comfortably. (Kelly himself once mused that there were so many characters that he presumed they must work in other strips on their days off.) I rediscovered POGO in the early seventies when I picked up a copy of the book TEN EVER LOVIN' BLUE-EYED YEARS WITH POGO. Being the obsessive collector that I was, I had soon amassed most of the POGO trade reprints that had been being published since the mid-fifties and started on collecting the comic book series.

For the uninitiated, POGO at its best is a delightful mix of gentle humor, Carrolesque wordplay and political and social satire. An odd mix to be sure but Kelly pulled it off more often than not and ended up with one of the top comic strips of all time in anyone's book.

Here's a link to the Pogo Fan Club site run by Steve Thompson who, oddly enough, is NOT me. It did confuse the heck out of the mailman back when I belonged to the club though when I would get copies of the great club newsletter, THE FORT MUDGE MOST, addressed TO Steve Thompson, FROM Steve Thompson! Merry Christmas, Steve!
Posted by Booksteve at 1:11 PM