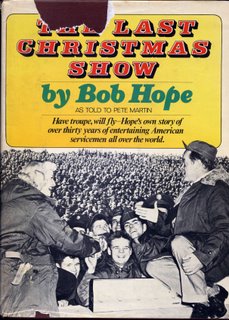 There's a story on AOL this morning about how some of our fighting men in Iraq are treating this as just another day. One young man actually said that he wouldn't have known it was Christmas if someone hadn't told him. So what do we send them: Rumsfeld. Sigh.
Not too long ago, we sent Bob Hope. From 1943 until he just couldn't do it anymore, if we had troops overseas at Christmas, Bob Hope was there with Lana Turner, Rita Hayworth and later Raquel Welch, Ann-Margret and Joey Heatherton. Still later he took folks with whom he himself was probably only vaguely familiar but that he thought would make the troops feel a little bit less alone. If someone was popular, Hope got to them and convinced them to go to the South Pacific, to Korea, to Viet Nam and to Iraq. This book, THE LAST CHRISTMAS SHOW, came out in 1974 and was one of a series of entertaining books credited to Hope but actually ghostwritten by others. This one admits that it's "as told to Pete Martin." At the time, after three decades of spending the holidays with US troops across the world, Hope actually thought he was done. As soon as the need arose again, however, Hope was there and the trips began again. Bob Hope died in 2003 at the age of 100 having seen far more wars than a man should see.
No sane person likes war and you can argue the politics behind getting our sons and daughters killed for years but the point is, when they're off fighting a war, we have to truly show our support and appreciation. For nearly 5 decades, we gave our fighting men and women Hope. Now we just give them Rumsfeld. There's no hope.
Posted by Booksteve at 10:58 AM