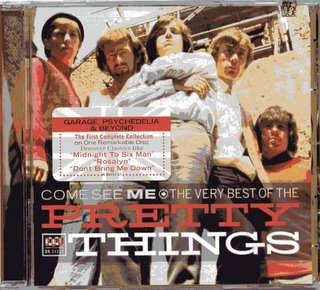 Last year, a rare thing happened to me. I discovered a sixties band that I had never heard of and yet their music was amazing and sounded as if I’d known them for years. To be fair, I had in fact heard of the Pretty Things. It’s just that I guess I considered them "also rans" as I had somehow managed never to hear any of their music.
Founded in the early sixties "English white boy blues" period by Phil May and guitarist Dick (as opposed to Mick) Taylor, who had been with the pre-fame Rolling Stones, The Pretty Things outdid the Stones and the Yardbirds on their blues covers, slipped deftly into pop psychedelia and, in fact, crafted the actual very first "rock opera," S.F.SORROW, which Pete Townshend acknowledged as an influence on TOMMY.
They apparently have stayed together and/or, like Yes, regrouped in various configurations to this very day. I’m sorry to say that I don’t much care for their music since 1970 or so but nearly everything up until that point is gold, particularly catchy tunes like "Talkin’ About the Good Times," "Balloon Burning," "Walking Through My Dreams" and the bizarrely incredible "Defecting Grey." The latter would undoubtedly sound just pretentious if 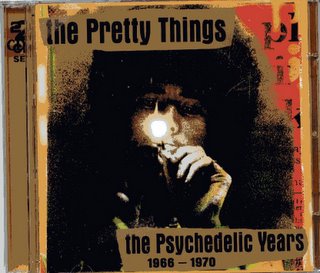 someone recorded it today but remember, no one had heard anything quite like it at the time (well…maybe Buffalo Springfield’s "Broken Arrow").
If, like me, you love sixties music, British rock and psychedelia and you, too, have never discovered the Pretties, try the two compilation CD’s scanned here for a revelation!
Posted by Booksteve at 10:51 AM