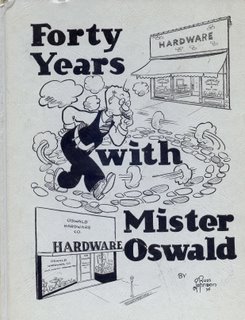 Last week, in Tom Spurgeon's FIVE FOR FRIDAY poll, I chose FORTY YEARS WITH MISTER OSWALD as a great comic strip collection.
It seems like every few years, comic strip fans discover MISTER OSWALD. Created by Russ Johnson in 1927, he amazingly continued to write and draw the strip until the 1990’s, finally passing it on to other hands but living until age 101! Here’s the catch: This classic strip has only appeared in Hardware Retailer, a hardware store trade publication. In fact, Johnson, in the only book collection of the strip, 1968’s FORTY YEARS WITH MISTER OSWALD, claimed, "I’m not a cartoonist. I’m a hardwareman who has always liked to draw pictures." False modesty aside, Russ Johnson was one hell of a cartoonist! Done in the classic jazz age "bigfoot" style of cartooning, his work changes little over the years and his humor, judging by the collection, is always very small town, LUM ‘N’ABNER kind of stuff but the Hardware store setting doesn’t limit the audience. It’s retail and we’ve all experienced retail from one side or the other.
Mister Oswald, himself, is the proprietor of the store and over the years we see many supporting characters but the most original is Herman. Herman, whose short stature, muscles and oddly shaped head make him look like nothing so much as a misplaced DICK TRACY villain. 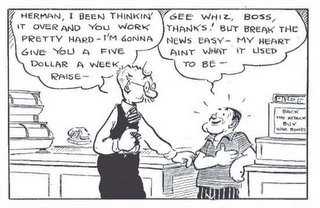 The strips in the book are not dated and since there’s little variation in style, it’s often hard to tell what era they come from but much of the humor is timeless. Long out of print, your best bet at discovering FORTY YEARS WITH MISTER OSWALD is to check Ebay or your local used book store (that’s where I found mine about twenty years back). Maybe it’s time for THE COMPLETE MISTER OSWALD?
Here’s a link to Russ Johnson’s final interview:Hogan's Interviews Russell Johnson Apparently, by age 101, he was finally admitting that he was, in fact, a cartoonist!
Posted by Booksteve at 8:23 AM