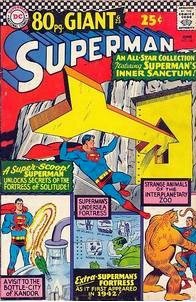 Okay, if you're like me, one of the coolest things about Uncle Mort's "Superman Family" was that the Man of Steel had this great big house built inside a mountain in the Arctic with a giant golden door and a giant key that no one could lift except Superman. AS George Carlin taught us, you have to have a place for your "stuff." 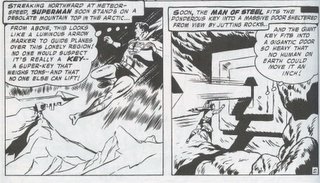 This was where Superman kept his "stuff." In his case, that "stuff" included a bunch of statues of friends and foes, robots, laboratories, a full zoo of alien creatures, a rather narcissitic trophy room and, oh, yeah, the entire bottle city of Kandor after it was discovered to have been shrunken by Brainiac. None of that ice crystal crap from the movies, this was HOME! 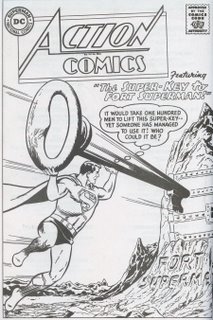 That said, I'm reading DC's recent SHOWCASE edition of SUPERMAN and I can't help but notice that artist Al Plastino apparently missed a memo or otherwise just refused to go along with the rest of the world. According to legend, DC often originated cover ideas first, then did the stories. Okay, so the cover to this issue of ACTION may have been the very first time the scene had been depicted. 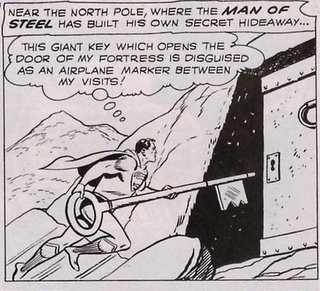 Wayne Boring drew the accompanying story, however and established that the key was shaped like a humongous arrow and weighed tons !! 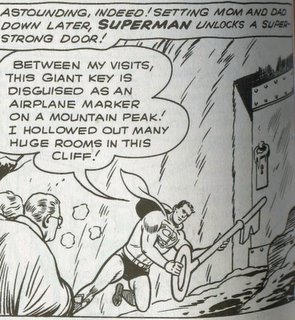 Plastino's key in later issues looks kinda heavy but I think I could lift it, y'know? That's just wrong!! Even the text says that it weighs "tons." Who's gonna mistake that little thing (that looks just like a KEY, I might add) for an "airplane marker?"And what about that door? Not only is it different looking every time but Plastino's version has a door knocker! What, does he expect the Martian Manhunter to drop in unannounced? Sigh. That was the Silver Age for ya. Nothing if not inconsistent but wonderful nonetheless if you were the right age!
Posted by Booksteve at 9:48 AM