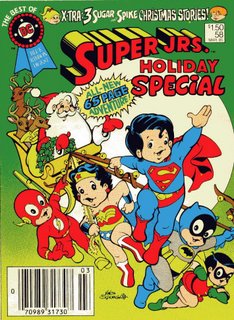 Now here's a REAL oddball comic--so much so that it was covered by guest writer Mike Sacal in Scott Shaw!s ODDBALL COMICS column here http://www.comicbookresources.com/columns/oddball/index.cgi?date=2001-05-07 back in 2001 in what is probably it's original Mexican version. I'll refer you there if you're interested in plot details.

The English language version seen here kind of snuck out in 1984 as part of DC's mostly reprint digest line. Thus it went largely unnoticed by the fans. I vaguely recall reading several years prior to this comic (in THE COMIC READER?) that DC had developed these characters and that they would probably be seen mostly overseas. In point of fact, DC had been publishing quite a bit of interesting stuff ONLY overseas including all new SUGAR AND SPIKE stories by Shelson Mayer!!! Many of these were also printed in these early eighties digests and were probably assumed by most fans to be reprints.

Judging by the Oddball article's cover picture, it looks like the Superman character had blonde hair in the original. Again, if I recall correctly, these characters and 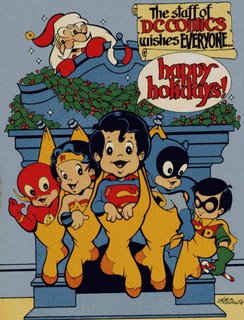 other DC Jrs were heavily merchandised with dolls, toys and pillowcases, too, all outside the US. Apparently the blonde hair was considered a bit much for the US market. The cover is signed by Vince Squeglia and seems to be his only credit in the GCD :: Home. A little Net check comes up with a book on carving Dickens Christmas figurines by a Vincent Squeglia (what are the odds?) but little else.

Although hampered by size and printing quality, Former Wally Wood assistant (and a fine writer and cartoonist himself!) Nick Cuti edited the DC digest line for much of its run and snuck in quite a bit of surprises along with a superior selection of reprints. Although definitely not an award winner, the SUPER JRs HOLIDAY SPECIAL is certainly an enjoyable bit of pre-"grim and gritty" DC trivia.

Oh, perhaps best of all, this particular digest is rounded out with three classic SUGAR AND SPIKE Christmas stories! Allow me to add my voice to the growing call for S&S DC SHOWCASE editions! The only comics readers who don't love this series are those who refuse to get past thinking it's just for little kids.
Posted by Booksteve at 10:15 AM