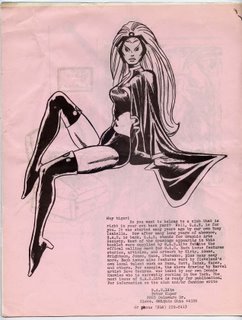 Here's an interesting ad from the back of a Cleveland convention booklet from 1976. The art is by Storm co-creator Dave Cockrum and inked by Cleveland's own Dennis Knowles. Note, however, that the ad itself ,pushing a local comics club created by Tony Isabella, is signed by Peter Kuper who went on to his own fame as an independent cartoonist before taking over the popular SPY VS SPY strip in MAD. Here's a link to Peter's website :Peter Kuper • Illustration.

As far as that convention, it was the biggest one I'd attended up to that point. It stormed all three days we were there. The con was held in a fancy, prestigious but clearly past its prime downtown hotel. If you opened the window in my room, you could touch the wall of the building next door and if you leaned out and looked to the left, you could see black smokestacks belching black smoke out over a black bridge. A week later, it was in the news that there was a malaria outbreak in Cleveland because of all the mosquitos that followed all of the heavy rains!

For me, the big attraction was the US premiere of the new TV series, SPACE;1999. Turned out that it was on an early videotape machine in a small room where apparently only three folks besides myself considered it that big of an attraction. (Aside: One of those folks was teenaged Cy Voris who went on to write, among other things, the movie BULLETPROOF MONK). Seeing as how the room next door was spotlighting a STAR TREK episode on a big screen and we could all hear the crowd in there chanting along with Kirk's opening, I'm surprised we all lasted as long as we did with Landau and company. Eventually...and long before the two hour episode ended, we all got up and went in with the others to watch TREK.
I met Tony Isabella for the first time at that Con and I at least saw Marv Wolfman. Other than that, I was still pretty shy so I mostly just bought lots of stuff in the dealers room. If I thought that one was big I was in for a shock the following year when I attended my first and only New York Comic Art Convention...in Philadelphia! Huh? As they say, though, that's another story.
Posted by Booksteve at 8:01 AM