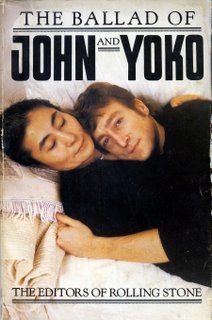 When John Lennon died, there were literally hundreds of "commemorative" (read: quick cash-in) books and magazines that came out quickly. Now, to be fair, many were sincere fannish efforts by underfunded people who felt they HAD to do something but ultimately few were worth noting. I was going to run several that I felt WERE important, today, but I've opted to run just this one, a collection of Lennon-based articles from the entire run of ROLLING STONE. The main reason was that this picture, from his last photo session with Annie Liebovitz, is, I believe, how John would like to be remembered. He was always a work in progress, changing so amazingly completely time and time again and yet look at that face. That is a contented man in the arms of the woman he loves.

Had Kurt Cobain lived, we'd be seeing him on oldies tours soon. Had James Dean lived, he'd be retired after years of unsuccessful sitcoms. Their legends came about BECAUSE of their tragic deaths. John Lennon's legend existed long before and long after. Loved and hated in his lifetime by fans and friends alike, in death he has become simply beloved, warts and all. Isn't that how we all wish we could be remembered?

Oh, and had he lived, I'm convinced that the only time the Beatles would have gotten back together would have been on an episode of THE SIMPSONS. John would have appreciated the humor in that.
Posted by Booksteve at 8:16 AM