Terror Tales from the Crypt 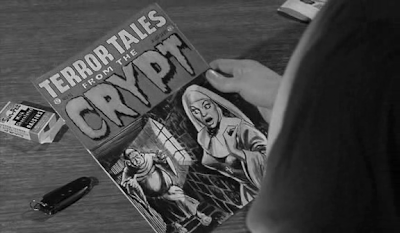 Okay, here's another guessing game for you! Here's a cool-looking fake EC-style comic book cover in a scene from a movie! I know I want to read it! The question is...what movie is this scene from? It wasn't a huge hit but it wasn't a flop either. I will tell you that it's from the 1960's and you know what they say--If you remember being there, you weren't really there! Another clue tomorrow if no one gets it!

UPDATE-6-19-Not even one guess? Good heavens people! If this were a real comic book the buyers and sellers would be all over it! Okay, fine. That's two clues. You tell me!
UPDATE- Fine! See if I have any more contests for you guys then! First clue above was "If you remember being there..." In this case, BEING THERE, the Peter Sellers classic from 1979. That was to tell you this was from one of Peter's fims--albeit obviously a black and white one--and send you scrambling back through his career with guesses. Second clue was "Good heavens..." and final clue was "... buyers and sellers." The comic is taken away from a young church parishoner in the 1963 Peter Sellers film HEAVENS ABOVE!, a religious and socilological satire that plays it straight pretty much, makes a number of valid, amusing points and finally veers off into a ridiculous, thoroughly inappropriate ending that undermines the strength of the rest of the picture.
http://en.wikipedia.org/wiki/Heavens_Above!

So there! Now go! Go back to whatever it is you were doing before! No more contests here! Grumble, grumble, grumble...see if I care!
Posted by Booksteve at 10:48 PM