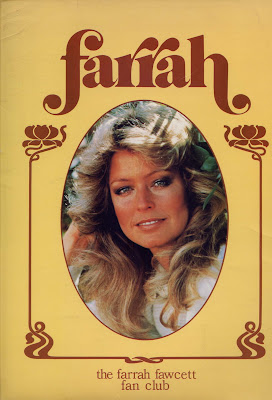 She may have had seeming mental issues later on but it was hard to find a teenage boy in the mid-seventies for whom Farrah Fawcett was not a rite of passage. The day I convinced my mother to let me put THAT poster up on my wall (with its oh-so-prominent nipples) was a proud day indeed. I even joined the Official Farrah Fawcett Fan Club. I had actually been a fan of that amazing hair and that glowing smile and that sexy Texas drawl since first noticing her in TV movies and commercials. I enjoyed her running role in David Janssen's HARRY O and thought she looked fantastic on the big screen in LOGAN'S RUN. She became Farrah Fawcett-Majors wh 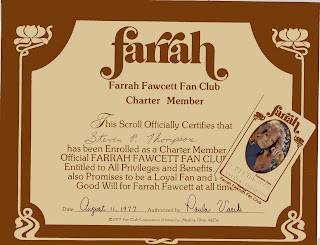 en she married Lee (SIX MILLION DOLLAR MAN) Majors and the two became the king and queen of TV when CHARLIE'S ANGELS hit big right out of the gate. Farrah's logical attempts at big-screen stardom resulted in less-than-perfect but still enjoyable vehicles such 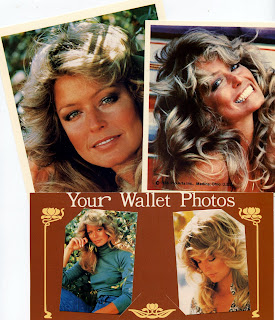 as SOMEBODY KILLED HER HUSBAND, SUNBURN and Stanley (SINGIN' IN THE RAIN) Donan's bizarre R-rated sci-fi thriller, SATURN THREE (in which all of us fanboys couldn't help note that the aforementioned nipples made their own screen debut!) Her decline was long and very public, starting with her marriage, then her career and eventually her health. After a long period where we all questioned her sanity, she rebounded a bit. As much as possible, she retained and regained some dignity. I look at Farrah at her passing like an old lover--I haven't seen her in ages but we shared something special and I'll miss just knowing that she was still out there somewhere. Rest in peace, Angel.
Posted by Booksteve at 1:57 PM