Movies That Fell Through the Cracks # 50 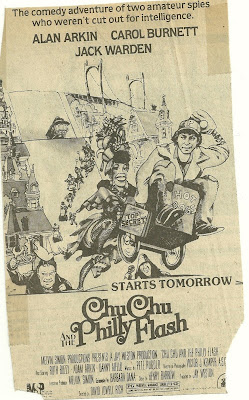 CHU CHU AND THE PHILLY FLASH was a 1981 comedy that took itself a tad too seriously...or was it a drama that just seemed a bit too silly? Don't know. Didn't last long in my neck of the woods for me to see it and, as I stated last week, after FIRE SALE the mere presence of Alan Arkin did not automatically guarantee that I would see a movie the way it earlier had.

In this case, the picture seems to have been a family affair. Co-written by Arkin's then-spouse, Barbara Dana, and featuring a number of other "Arkins" (Adam included) as you zip down through the cast. And oh, what a cast! The wonderful Carol Burnett in one of her several less than satisfying attempts at big screen success (THE FOUR SEASONS and ANNIE were others) aside, there are some amazingly enjoyable character actors listed for this one--Jack Warden, Vincent Schiavelli, Danny Aiello, Lou Jacobi, Vito Scotti, Dabbs Greer, Danny Glover (in only his second feature!), Steve McQueen's ex Neile Adams McQueen and SID F-ing HAIG!!

Directed by David Lowell Rich who had done some passable TV work for years but seemed stymied by transitioning to the big screen, the movie tells the story of a former big league baseball star turned homeless alcoholic as he's given the chance to try out for a minor league team if he can come up with the money for the trip. Local music teacher and street performer "Chu Chu" finds a briefcase with documents she's convinced will get him that money only to have the briefcase's owners attempt to take it back the hard way. Along the way, Chu Chu and the former Philly Flash fall in love.

Doesn't sound THAT bad and with all those great actors...still, would depend very much on the tone. Have you ever seen it? Apparently it was out there on cheap VHS at one point but I don't know if it's been on DVD. I'd be willing to bet that the most rabid fans of Arkin and Burnett have not seen this one.
Posted by Booksteve at 2:03 AM