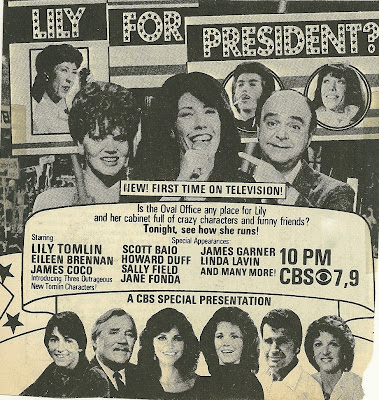 TV specials are an interesting phenomenon in that they are often built up with expectations that they can never meet and yet after they air they disappear, never to be rerun and with a growing legend of how great they were. Here's a good example. LILY FOR PRESIDENT was a 1982 Emmy nominated (for Best Editing but, hey...) TV special featuring the wonderful Lily Tomlin...well...running for president. I wouldn't be surprised to find it had actually been sitting on a shelf for a couple years as 1982 wasn't even an election year! As in all of her TV specials, Lily portrays many characters. As in all of Lily's TV specials, they never seem as funny as you know they should. Look at that cast, though! Where else can you find Scott Baio in the same cast list as Jane Fonda and good old Howard (radio's SAM SPADE) Duff? Further down in the cast one can even find Paul (Pee Wee!) Ruebens. The problem, of course, is that these are all little more than cameos as Lily overindulges her at that point socially conscious but not particularly amusing character schtick. One sees these things, though, in old TV GUIDES and thinks how great it must have been. LILY FOR PRESIDENT was actually released on VHS about a decade past its original running and those of us who saw it were reminded of its essential mediocrity and, except for rabid Lily Tomlin fans, those who hadn't found little other than a mild nostalgia for its once-in-a-lifetime (if mostly wasted) cast.
Posted by Booksteve at 7:39 AM