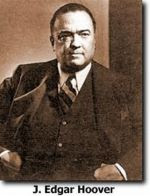 Actually, it's HEADLINE COMICS but note how ol' J. Edgar is drawn as such a he-man that he's willing to tackle the big gangsters bare-handed! Built like a burly, two-fisted football player, this version of the top G-Man seems to have little in common with the short, round, thin-haired guy with the scrunched in bulldog face that Hoover was in real life...to say nothing of the paranoid drag queen he apparently turned out to be.
Posted by Booksteve at 10:33 AM