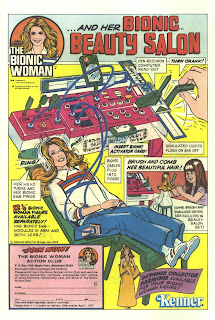 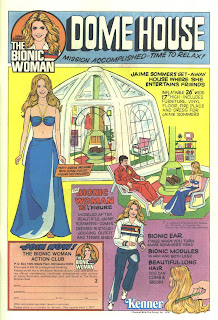 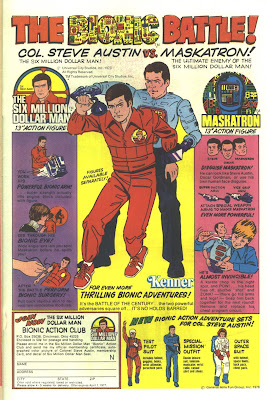 At one point in the seventies, everything in pop culture went bionic! At least it seemed like it had. THE SIX MILLION DOLLAR MAN was freakin' HUGE. Since bionic jokes and twists and characters were turning up everywhere, it made since for the production company to cash in themselves with the proverbial spin-off, in this case, THE BIONIC WOMAN. Looking at the two series today, they seem a tad dull. Lee Majors was a good lookin' fella and all but he was about as exciting as watching ink dry (and I say that with all love and respect as he's my wife's fourth cousin!). Even the slo-mo usage of "Steve Austin's" bionic powers (with accompanying music cues) seems to draaaaag in these quick cut post-MTV days. While the same could be said of Lindsay Wagner's "Jaime Sommers," at least it was obvious that she was an actress of some skills. Although not really a part of the seventies "T 'n' A TV that begat CHARLIE'S ANGELS, WONDER WOMAN and THREE'S COMPANY, she was naturally sexy and had a deft way with a funny line when she got one.

In the comics, Charlton, of all people, published the exploits of the characters in a packaged series that included art by fan favorite Neal Adams and his studio. Here, totally seperate from any of that, are three ads for some TV tie-in toys from the height of Bionic-mania!
Posted by Booksteve at 2:23 PM