Frank Thorne, Wendy Pini and Me 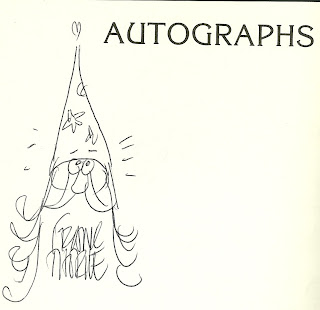 Over at THE BRONZE AGE OF BLOGS today, we are reminded that it is the birthday of Frank Thorne, the great "dirty old man" of comics. Happy birthday, Frank! Once a Kubert clone who toiled unheralded on Gold Key horror comics and DC war comics, Thorne reinvented himself as "the Wizard" when drawing Roy Thomas's sexy barbarian title, RED SONJA in the mid seventies and has gone on to become quite a cult figure on his own. Eccentric to the max, he even took his show on the road with a series of Red Sonja Lookalike Contests at various conventions for a couple of years. These were often strictly fan service events with a number of nubile young ladies in chainmail bikinis waving swords, spouting Robert E Howardesque prose and tossing silver coins to an almost exclusively male audience as they competed for the role of best lookalike. Mr. Thorne 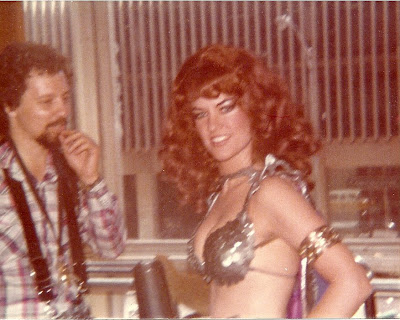 dutifuly presided over all in his wizard costume and hat.

I got to see Frank, Angelique and the two Wendys at a Seuling Con Sonja Contest in '77. That was the year they had to move the New York Con to Philadelphia for reasons I don't recall at the moment. In spite of the appearances of Berni(e) Wrightson, Barry Windsor-Smith, Jeff Jones and a ton of NYC pros, the only autographs I got that weekend were from Frank (who did a little sketch!) and Wendy Pini (whose chainmail was quite intimidating to 18 year old me). I thin 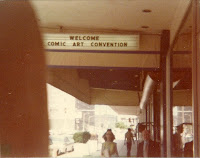 k that's her husband and future ELFQUEST co-creator, Richard in the pic I snapped. I have a pic of Mr Thorne somewhere but it's AWOL at the moment. He was quite nice and rather soft-spoken but with a mischievous grin even during the brief moment we spoke. The only other surviving pic from the trip other than some Philadelphia monuments) is this not particularly good snapshot of my parents standing under the hotel marquee advertising the Con!

Check out http://bronzeageofblogs.blogspot.com/2009/06/frank-thorne.html for more details on Frank and a Thorne-drawn recollection of the Sonja shows!
Posted by Booksteve at 6:14 PM