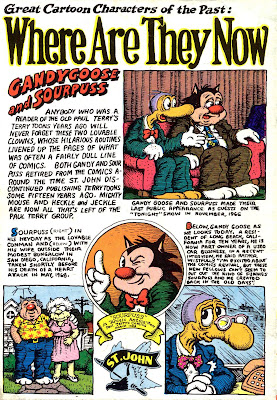 As much as he is an anarchist, Robert Crumb is also a traditionalist and always has been. As such, here, from the back cover of the first issue of MR. NATURAL, is Crumb's amusingly wistful "Whatever happened to...?" tribute to the Terrytoons cartoon and comic book animals, Gandy Goose and Sourpuss. In the cartoons, Gandy spoke in a voice copied from Radio's Fire Chief Ed Wynn while his feline antagonist replicated Jimmy Durante (as H-B's later Doggie Daddy would also).
Posted by Booksteve at 10:11 AM