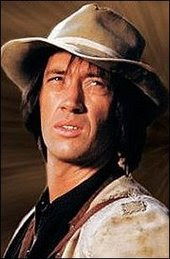 I grew up knowing actor John Carradine through his constant references in FAMOUS MONSTERS magazine as well as his continual TV appearances on everything from THE MUNSTERS to McCLOUD. It was, then, a bit of a stretch to ask me to accept his son David as a Chinese priest in KUNG-FU. Once past that hurdle, however, I was able to enjoy watching David Carradine create in Kwai Chang Caine what could arguably be described as one of the most complex characters in television history. It was, however, a role that haunted him for the rest of his career. In spite of exceptional performances in early films such as BOXCAR BERTHA and BOUND FOR GLORY, drug, alcohol and anger issues seemed to hold him back after a time. He never quit working but his vehicles tended toward the straight to video sort. Finally, in 2003, Quentin Tarentino revived David's career by casting him as the evil, ruthless violent but utterly charming title character in the two KILL BILL films. It's actually a smallish role, told mostly in flashbacks and voiceovers until late in the second film and yet Carradine brought to the part an unexpected touch that garnered him both award talk and a new start. The actor spoke in interviews at the time of how his career was going nowhere but forward. Indeed, IMDB shows David Carradine listed in nearly 50 performances just in the past five years, very few of which I had even heard of. Like John in later years, it seems that David's eagerness to work led him to take just about any role offered. As word no doubt begins to filter out about his alleged suicide, we will all think how tragic it was. Let's remember that David Carradine was a complex man, a good actor and leaves behind him a legacy of fine performances in hundreds of lesser films as well as the enduring power of the Caine characterization. I think that's a legacy in which John Carradine would find a great deal of pride in his son. Thank you for sharing yourself with us, David. We'll miss you.
Posted by Booksteve at 12:29 PM